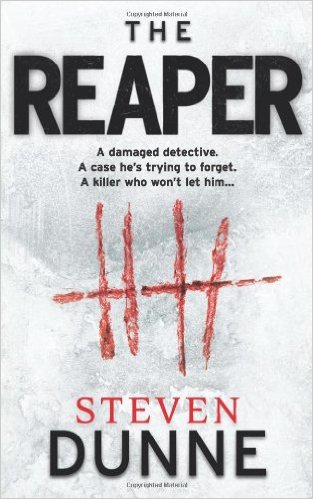 I was feeling a little rebellious last week, in that I decided to cheat on my TBR because I have so many books I want to read and following on from Make Me I moved onto Steven Dunne’s The Reaper!

Continuing to cheat on my TBR this weekend 😂🙈 #currentlyreading The Reaper by @ReaperSteven,safe to say I'm hooked!😱 pic.twitter.com/Xh61HGIrje

I finished The Reaper earlier this week, and it’s taken until now for me to sit down and try to formulate a review. I just don’t have the words!!! This was my reaction when I had put down the book! 🙂

Finished The Reaper by @ReaperSteven! My brain hurts from thinking! 😂🙈

About the book (via Goodreads):

A damaged detective.
A case he’s trying to forget.
A killer who won’t let him…

Detective Inspector Damen Brook thinks he’s left his past behind him in London. But it seems a serial killer has followed him north…

Brook’s seeking sanctuary. Years in the MET have left their mark – so much so that he’s fled to Derby leaving behind his marriage, his teenage daughter and very nearly his sanity to wind down a once promising career in the peace of the Peak District.

But one winter’s night, Brook is confronted by a serial killer he hunted many years before – The Reaper – a man who slaughters families in their homes then disappears without a trace.

To find this killer Brook must discover what the Reaper is doing in Derby, why he’s started killing again and what, if anything, connects the butchered families.

When I first started reading The Reaper I had absolutely no idea what to expect. All I knew was what I had read from the blurb, and the rave reviews fellow bloggers and friends had written also got a look in as well. I’d had The Reaper on my kindle for AAAAAAGES, and seeing as how it was recommended to me again recently, I decided it was about time I met DI Damen Brook.

Brook is undeniably flawed, but it is borne from previous experiences and it really adds to the melancholic air of his character. I love a good protagonist, and I really enjoy finding out their backstory and what made them the way they are when the reader is introduced to them. That’s another reason I like to start at the beginning with series.

Brook is in Derby, working on the murders of a family which he finds bears many similarities to a couple of cases of is from way back before he relocated from London, which the aforementioned Reaper was the perpetrator.

The Reaper reads like a cat and mouse game at times, with both sides having the upper had at various different points in the story. It adds a sense of tension and menace to the already fraught narrative.

Though this is the first in the series, the author has done a very good job with the history and backstory of the characters. With the story jumping between the past and present, we get glimpses into Brook’s breakdown, and the events surrounding the investigation of The Reaper which lead up to it.

I’m not going to lie, The Reaper made my brain work overtime while I was reading it. At times, I found it quite difficult to separate the past and preset investigations, but it didn’t deter my enjoyment of the book. It’s safe to say I’ll be reading the following 5 books in the DI Damen Brook series. I thoroughly enjoyed The Reaper, giving it 4 stars on Goodreads. It’s available to buy and you can purchase from Amazon by clicking the link below:

The Reaper by Steven Dunne

11 thoughts on “The Reaper by Steven Dunne”