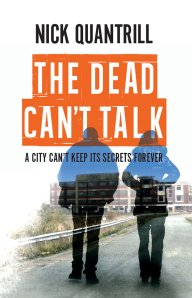 See what I did there?! 😂 I know, my puns are terrible, but I had to come up with something!
Aaaaaaanyway, day 2 of a week of blog posts featuring Nick Quantrill, and I’m lucky enough to have a post about Unorthodox Protagonists. I don’t know about you all, but I’m suitably intrigued 😉

So without further ado, I’ll hand it over to the man himself…

Unorthodox Protagonists (by Nick Quantrill)
Undoubtedly, the police novel dominates the crime fiction field. The professional police officer, often a Detective Inspector, investigates the worse humanity can offer, sometimes over stepping the mark, but inevitably righting the wrongs that have been committed. The dominance of the sub-genre means it’s saturated with novels, and not all of them are great. But for all the generic heavy drinking detectives with broken personal lives, we have many inventive interpretations. Eva Dolan’s Zigic and Ferreira series set in Peterborough’s Hate Crime Unit and Luca Veste’s Murphy and Rossi continue to redefine what we can expect from a police novel.

It’s only fair to confess that I once tried to write a police novel. It was terrible. Really, really terrible. It borrowed heavily from Rankin’s Rebus series, essentially seeking to map my home city of Hull in the way Ian maps Edinburgh. It wasn’t for me as a writer, and besides, David Mark has very much nailed down the Hull cop novel with his excellent DS McAvoy series.

I had to do something different. The Joe Geraghty trilogy featured a small time Private Investigator. But Geraghty isn’t the wise-cracking, whisky drinking type of guy who has a femme fatale stumble into his office every other day. It was important to me that he reflected his surroundings. Over the course of the trilogy, Hull moved from being voted the UK’s ‘Crap Town’ title holder to 2017 UK City of Culture, and it’s opened the door to more stories I want to tell. But could he open the door to the rich and the powerful, the kind of people suddenly interested in an isolated northern port city? All I knew was that I didn’t want to write a police character.

I spent some time experimenting with different protagonists, but settled on Anna Stone and Luke Carver, who are both introduced in “The Dead Can’t Talk”. I need to confess that Stone is sort of a police officer. She’s a Detective Constable with Humberside Police, but is on an enforced break after overstepping the mark when investigating the disappearance of her sister. Luke Carver is a man she’d previously arrested, but he’s now out of prison, drifting and looking for a fresh purpose.

They’re brought back together when Carver is handed a videotape, a piece of evidence which might just unlock the mystery of Stone’s sister’s disappearance. It won’t be an easy road for either of them. Their recent history means they can’t trust each other and have to develop an understanding. They’re different, but also the same, an irony they both come to recognise. Can they continue to work together and what form will any agreement take? I’m still peeling back the layers and am excited to find out for myself. But I do have a police character in mind to develop in the future… 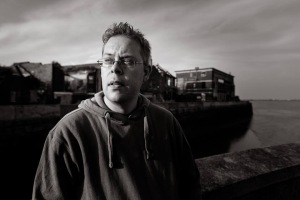 Nick Quantrill was born and raised in Hull, an isolated industrial city in East Yorkshire.
His acclaimed Joe Geraghty crime novels, featuring a small time
rugby league player turned Private Investigator, have mapped the city’s journey from being branded the UK’s Crap Town winner through to being crowned 2017 UK City of Culture. “The Dead Can’t Talk” marks the start of an exciting new series and introduces readers to Anna Stone, a disillusioned police officer, and Luke Carver, a drifter freshly released from prison. Still exploring a rapidly changing Hull, the settings may be local, but the ideas and issues resonate on a much wider basis.
Also a prolific short story writer, his work has appeared in various volumes of “The Mammoth Book of Best British Crime”. In 2011, he became the first person to hold the role of ‘Writer in Residence’ at Hull Kingston Rovers, contributing exclusive fiction to the matchday programme and assisting with the club’s literacy programme. A regular fixture at events, he’s taken to the stage at Theakstons Old Peculier Crime Writing Festival in Harrogate, Crimefest and Iceland Noir, as well as numerous libraries around the north of England.

About The Dead Can’t Talk:

How far will Anna Stone, a disillusioned police officer on the brink of leaving her job, go to uncover the truth about her sister’s disappearance? Approached by Luke Carver, an ex-Army drifter she’s previously sent to prison, he claims to have information which will help her. As the trail leads from Hull and the Humber’s desperate and downtrodden to its great and good, an unsolved murder 25 years ago places their lives in danger, leaving Stone to decide if she can really trust a man who has his own reasons for helping.

Huge thanks to Nick for his guest post! I have The Dead Can’t Talk on my TBR so there will be a review up just as soon as I’ve read it! 😊

7 thoughts on “The Dead Can’t Talk… But Nick Quantrill can!”