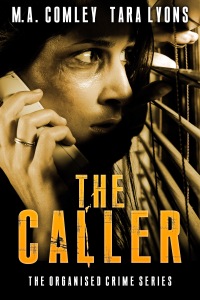 The first gripping book in The Organised Crime Team series by NY Times bestselling author of the Justice series, M A Comley and co-author Tara Lyons, author of In The Shadows.

When The Caller rings… what would you do?

The Organised Crime Team is a newly-formed unit with one of the toughest tasks in London. Led by DI Angie North, their first investigation is a cold case that has foxed several officers in the Met for months.

After Angie holds a TV appeal regarding the case, a number of similar aggressive attacks are brought to her attention. The team call on their contacts on the street for help. Their interest is sparked when several local names surface.

To bring the criminals to justice a member of the Organised Crime Team is asked to risk their life in a dangerous covert operation.

First off, my thanks to Tara and Mel for letting me take part in the blog tour for The Caller. I was lucky enough to read it before publication and I’m super grateful. Previously, I had read their novella, Web Of Deceit so I was excited to see where they would go next. Incidentally you can catch that review by clicking the following link:

Web of Deceit by Mel Comley and Tara Lyons

The Caller is the first in the Organised Crime Team series by the duo and it was a very interesting read. I hadn’t read the synopsis before I started so I had no idea where the story would go.

Starting with a brutal robbery, the book delves deep into the gang culture in London. Following DI Angela North and her team, The Caller is a slow burning police procedural novel. It is character rich and focuses a lot on the individuals both on the Organised Crime Team and on the Streetlife gang who are committing the robberies and assaults.

The Caller is a promising start to a new series. The authors work really well together, in that it’s impossible to tell this book was co-written. Mel and Tara have managed superbly to weave together the full story and it works well.

While I did enjoy The Caller, I found it to be a little slower in pace to my usual reads, which is not a bad thing by any means. I did like this book, I just found it to be more about building a picture of the main characters than the actual crimes and perpetrators. Which makes total sense for a series, I just felt there could have been more action. This is all personal preference though and as I’ve said, I’ve read so many books lately that were packed with drama that I wasn’t expecting the pace in The Caller.

However, the authors have created a promising beginning to a series. Both are excellent authors, in their own right and together, and The Caller is proof that working together to create a cohesive book structure is possible.

The Caller was published on June 16th and you can purchase a copy by clicking on the link below:

The Caller by Mel Comley and Tara Lyons