I’m delighted to be today’s stop on the blog tour for Cut To The Bone by Alex Caan and I have a fab guest post for you all!

Alex Caan has spent over a decade working in Information Systems Security for a number of government organisations, and is currently specialising in Terrorism Studies. A lifetime passion for writing was sparked by the encouraging words of an English Teacher in school, and eventually led to Alex successfully completing an MA in Creative Writing, and write Cut to the Bone.

About Cut To The Bone:

Ruby is a vlogger, a rising star of YouTube and a heroine to millions of teenage girls. And she’s missing. She’s an adult – nothing to worry about, surely? Until the video’s uploaded. Ruby, in the dirt and pleading for her life.

Who better to head up the investigation than the Met’s rising star, Detective Inspector Kate Riley? She’s leading a shiny new team, high-powered, mostly female and with the best resources money can buy. It’s time for them to prove what they can do. Alongside her, Detective Superintendent Zain Harris – poster boy for multiracial policing and the team’s newest member – has his own unique contribution to make. But can Kate wholly trust him and when he’s around, can she trust herself?

Ruby’s millions of fans are hysterical about what may have happened to her. The press is having a field day and as the investigation hurtles out of control in the glare of publicity, it becomes clear that the world of YouTube vloggers and social media is much, much darker than anyone could have imagined in their worst nightmares.

I had a bleak upbringing where there were very few ambitions around, and the one place where I could go to escape and dream big, were books. It was to fiction I turned to find my heroes, my escape, my determination and strength.

Weekend trips to the library started young, and I dread to think how empty my life would be without libraries, and it genuinely fills me with deep sadness that they are under threat. I discovered C S Lewis, Tolkien and especially Roald Dahl. For years I thought I might be an orphan because I was so different to my family and those around me, and that my real parents would turn up one day to claim me. I remember watching Dahl sharpen his pencils and write in his shed as a child, and realised that being an author could be a way to live, to earn a living. The dream I was carrying around could be real. And his novels were perfectly structured, full of the most interesting characters and flights of fancy. I’m sure he never stuck to the write what you know rule!

From Roald Dahl I graduated a bit too quickly to sneakily reading books from my much older siblings. I got exposed to Tom Clancy and Jackie Collins far too early in life! Luckily I didn’t have a clue what most of it meant. When I re-read some of these novels years later I was shocked at what my innocent brain had simply not understood. Google was not available then thank God! When I didn’t know a word if it wasn’t in the dictionary it just stayed a mystery.

My first official adult novels were those from school, when I devoured the classics, from Austen to Kipling to Shakespeare (although I only recently really got to appreciate him properly-Julius Caesar live-end of!) But not surprisingly it was Agatha Christie and Sir Arthur Conan Doyle that really drew me in, and left me breathless on so many occasions. And To Kill A Mockingbird, which is a crime novel as far as I’m concerned!

And then when I started buying novels I would read everything but the two writers that carried me through from my teenage years to now are Graham Greene and John Le Carre. I still haven’t read all their work because I will be in flux when I finish, so am pacing myself. Suffice to say they had a huge impact on me, and if that sense is conveyed in any small way in my own work that would be the best compliment anyone could give me. I feel the responsibility to tell a global story, even in a crime novel like Cut to the Bone, and they showed me just how it can be done. I love how small events in ordinary lives can ripple out and have bigger consequences, and how we are all in our own way important players in the story of the world. Everyone can make a difference, even if they die trying. It’s that hope both Greene and Le Carre really bring home to me, the hope that someone will always be around who will try and make things better. And through Kate Riley and Zain Harris I am determined to do that, one story at a time, in my own little way. 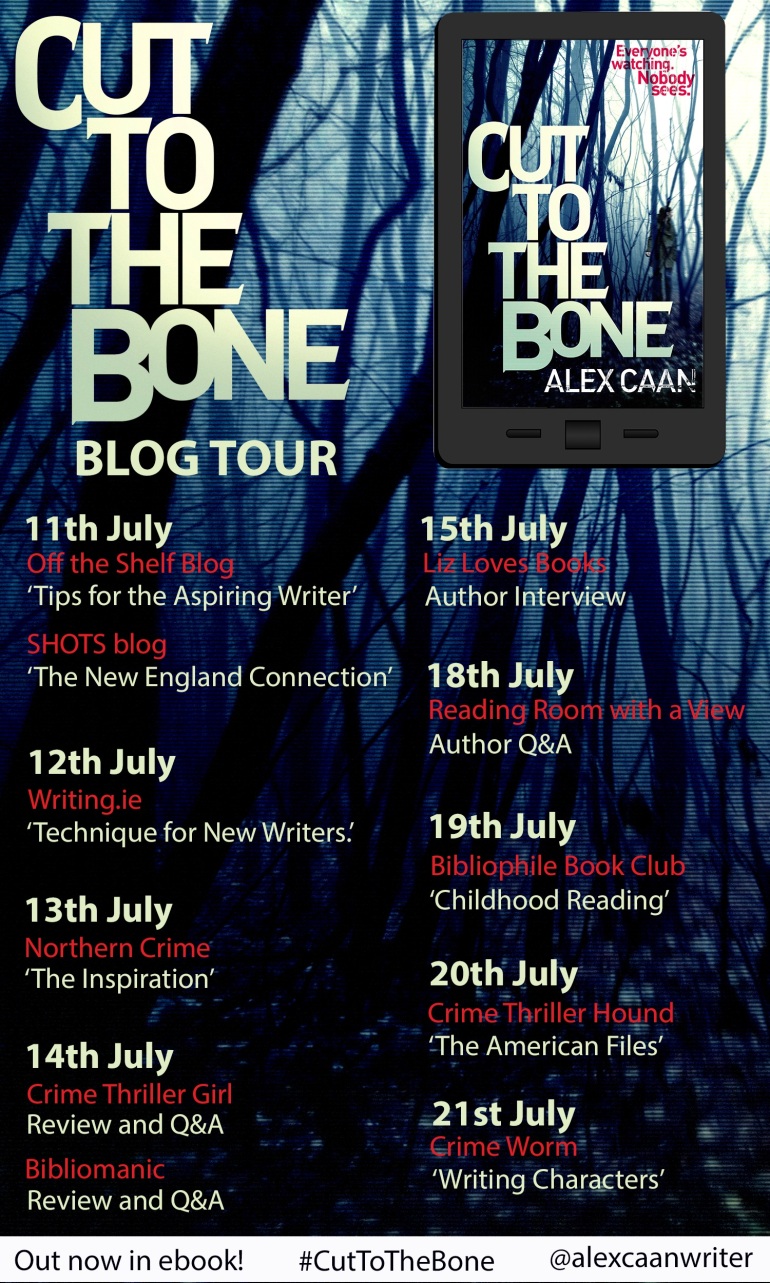 3 thoughts on “Alex Caan Cut To The Bone Blog Tour”