Today I’m thrilled to have a brilliant guest post from the lovely Holly Seddon. Holly is the author of Try Not To Breathe, which I read and loved!!!

Holly Seddon is a freelance journalist and editor. As a mother of four, Holly divides her time between writing, walking her miniature schnauzer and chasing homework-evaders around the room. And then doing some more writing when night falls.

TRY NOT TO BREATHE is her first novel, published to great acclaim in the UK, US, Netherlands, Germany, Russia, Poland and Taiwan.

Holly is currently writing her second novel. You can ask her about it @HollySeddon.

About Try Not To Breathe:

Amy Stevenson was the biggest news story of 1995. Only fifteen years old, Amy disappeared walking home from school one day and was found in a coma three days later. Her attacker was never identified and her angelic face was plastered across every paper and nightly news segment.

Fifteen years later, Amy lies in the hospital, surrounded by 90’s Britpop posters, forgotten by the world until reporter Alex Dale stumbles across her while researching a routine story on vegetative patients.

Remembering Amy’s story like it was yesterday, she feels compelled to solve the long-cold case.

The only problem is, Alex is just as lost as Amy—her alcoholism has cost her everything including her marriage and her professional reputation.

In the hopes that finding Amy’s attacker will be her own salvation as well, Alex embarks on a dangerous investigation, suspecting someone close to Amy.

Told in the present by an increasingly fragile Alex and in dream-like flashbacks by Amy as she floats in a fog of memories, dreams, and music from 1995, Try Not to Breathe unfolds layer by layer to a breathtaking conclusion.

Try Not To Breathe by Holly Seddon 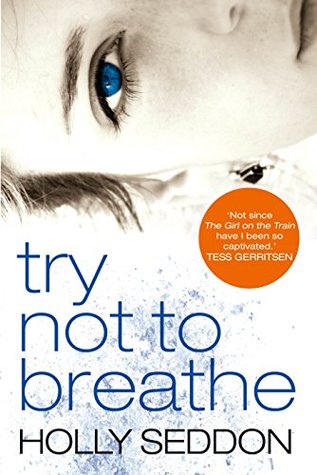 Where it all began

Try Not to Breathe originally began over a roasting tin bubbling with hot oil and scented with rosemary and garlic. I was only half-listening to a health programme about persistent vegetative states on Radio 4 while I cooked Sunday dinner, and I was just tipping the par-boiled spuds into the big tray when I heard a phrase that stopped me in my tracks. “It’s like a kind of living death,” someone said.

As much as my heart broke for the patients and their loved ones, that moment was the start of a journey that took six years. From shaking the roasting tray to getting to know my character Amy, a girl cut down in her prime, to seeing my book in shops.

It was a rough six years, in many ways. Their were some deep losses along the way that saw the work in progress put to one side because other people needed me more than my characters did, but I always went back to it.

Eventually, I was ready to submit to agents. The book was in perfect shape and needed no work whatsoever. (I’m joking, obviously). But I felt proud of it. It had a proper story, characters I loved and an interesting premise.  I didn’t exactly feel confident – does any newbie writer – but I felt like it was time to go for it.

I made a shortlist of agents whose work – and whose clients’ work – I admired. This sounds like a lie but I promise it’s the truth, top of that list was Nicola Barr. She’d worked with Colette McBeth on her debut Precious Thing, which I’d recently read. I’d also read about Colette’s own journey to publication and how Nicola had worked with her to hone the manuscript. This is what I really needed.

I sent my synopsis and three sample chapters and made a cup of tea.

I was off work at the time, recovering from a nasty operation and infection. It was early afternoon but I was still in my nightie. I shuffled into the kitchen to make another cup of tea, checked my phone and nearly collapsed: Nicola had replied. Better yet, she asked to see the rest. Still sore, riddled with stitches, in my nightie, I sprinted around and around the house, my dog in pursuit, because I had no idea how to handle the excitement. I stayed up all night re-editing a book that just that morning had seemed ready…

Signing with my agent the real beginning of the publication process. The second half of the book needed some work – I’d tried to write what I thought I had to, for the genre, and not what I wanted to – and Nicola helped me immensely and gave me confidence in my own intuition. It’s been a lot quicker the second time around – but that’s a story for another day.

In October 2014 Try Not to Breathe was sold to Atlantic/Corvus in the UK, where an incredibly passionate team have done a wonderful job of getting it out there, in the best possible shape. It’s since sold to publishers across the world.

The last two years have been incredible. Better than I ever could have dreamt when I first said, as a precocious toddler, that I wanted to write books.

I flew to New York to meet my US editor last November, and I’ve held copies of my book published in Turkish and German, I’ve been a bestseller (I still feel like a show off saying this) in several countries. But nothing will compare to the moment my mum sent a picture to me of my proud dad holding my book in Waterstones near my home town in Devon. For me, that was the absolute peak. The happy ending to a story that started with some ordinary roast potatoes and changed my life along the way.

Huge thanks to Holly for joining me on the blog today! Catch the next post on Steph’s blog tomorrow:

2 thoughts on “Spotlight on Holly Seddon”