First off, big thanks to Kim and the lovely folks at Bookouture for letting me have an early read of Tom Bale’s new book, it was a fab surprise!

Today’s my stop on the blog tour for All Fall Down and I get to FINALLY share my review with you all!

You tried to save a life. Now you’re fighting to save your own.
It should have been an idyllic day for the Turner family – until a dying man, beaten beyond all recognition, arrives at their home, uttering the words, HELP ME.

Rob and Wendy Turner and their children try to explain away the horrific scene as being in the wrong place at the wrong time, but in the days that follow their lives are threatened in ways they could never imagine.

The family is unaware that they are being watched by someone with their own terrifying agenda, who will stop at nothing to fulfil their own twisted desires.

But when hidden secrets come rushing to the surface, it’s clear not everything is as it seems in this happy family. Are the Turners a victim of circumstance – or does the key to their fate lie closer to home?

Forced to fight for everything they hold dear, can they save themselves before time runs out – or will their act of compassion see them paying the ultimate price…? 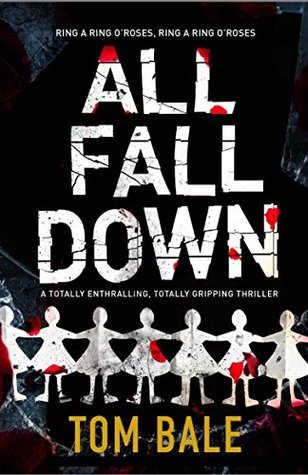 Tom Bale has had a variety of jobs including retail assistant, claims negotiator and project manager, but none was as exhausting as the several years he spent as a househusband with two pre-school children. Tom has been writing since the age of seven, and completed his first novel at fifteen. After twenty years and hundreds of rejection slips, his first novel SINS OF THE FATHER was published under his real name, David Harrison. With his next book, SKIN AND BONES, he acquired an agent, a pseudonym and a book deal that enabled him to write full-time. His latest novel is the thriller SEE HOW THEY RUN, published by Bookouture in May 2016. 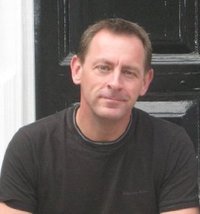 I am a huge fan of Tom’s, I’m not going to lie! I unapologetically fangirl on Twitter because I really enjoy his work so I was more than a little excited to read All Fall Down a MONTH before its release! Having read and LOVED See How They Run earlier this year (that review is here –>  See How They Run by Tom Bale) I was thrilled to get this one!

All Fall Down is twisted and brilliant in equal measure. To be fair, I wasn’t sure what I was expecting when I started it but that opener certainly sealed the deal in that I was hooked immediately and cursing the fact that I had to leave my kindle down to do real life stuff! I mean come on, do I have to make dinner? I’m at a really good part!!!! (Nobody went hungry, don’t worry!)

Tom Bale has a way with words. His writing is enough to give me the heebie jeebies about everyday, mundane things. Like locking your door at night (SHTR freaked me out for a while after that!) and now I have to contend with making sure our gate is locked too!!!! I don’t like being freaked out Tom!!! *evil eyes*

Scolding aside (he knows I love him really) All Fall Down is a super grippy, page turning rollercoaster of a book! I couldn’t fault the pace, I’m surprised my Kindle is in one piece with the speed I was page tapping towards the end if I’m honest!

I’m an absolute sucker for action in a book. And All Fall Down has it in spades. The characters are excellent too! A mature family is a departure from the characters in SHTR, and it seemed to give Tom much more scope in terms of what they may have experienced in their lives and pasts which gave them a bit more depth and made them seem knowledgeable if that makes sense?!

I’ve said it before, and I’ll say it again, Tom Bale as the ability to put ordinary characters in extraordinary situations and still manages to keep the momentum going within the plot. All Fall Down is a whirlwind of a book, it will pick you up, spin you around and throw you back down to the ground with a bang!!!

Make sure to catch up with the blog tour!

10 replies on “All Fall Down by Tom Bale”

I’m keeping Tom’s books for my autumn reading list, but your review had me grab my kindle to check if there were in it and I almost started reading! 🙂

Not obvious at all, haha!

Great review of a fab book, Kate. Excited to have a backlog to get to. Have read Skin and Bones, which was very very good!

Thanks Christine! I have all his previous books to read too!

I’m adding this to my TBR! Your excitement is making me want to read it. Nice review! 🙂

That’s great to hear! Thank you 😊

Cheating on your TBR 📚 ••••• Do you set yourself a reading list for the month? Ordinarily, I don’t but there are some books I want to read sooner rather than later. ••••• HOWEVER, this evening I wanted something good. Something I know I would enjoy. Something in the crime genre. So I picked one of my favourite Orenda authors, Gunnar Staalesen. His most recent Varg Veum novel came out last year, and it’s been on my TBR for ages so I picked it up earlier. ••••• I’m a huge fan of Scandinavian crime and thrillers, and Staalesen is a master in the genre. Wolves at the Door looks like it will be exactly what I’m looking for. ••••• #OrendaBooks #GunnarStaalesen #VargVeum #books #bookblogger #reviewer
Could I BE any more organized?! 😂 ••••• How do you keep track of your reading? ••••• I use @goodreads obviously, but I also wrote down what I read month by month. And if that wasn’t enough, I write down all the books I read in the year on another list. ••••• This Friends notebook from @primark is one of my favourites, so naturally it’s where I wrote this all down. ••••• #books #bookblogger #reviewer #Friends #notebook
Adding #TheUnspokenName by @aklarkwood to the #currentlyreading pile 📚 Thanks to the lovely @jamieleenardone @torbooks for sending me this beauty 🖤 #books #amreading #bookreviewer #bookblogger #fantasy #TBR
Meet the bookstagrammer (if that’s even what I am 🤣) I’ve gained a few followers recently, so I figured I should maybe introduce myself a little. I’m Kate and I live in the west of Ireland. I’m married to a wonderful man, and we have two kids, Tom and Isabelle. I am obsessed with all things black and gothic. I love anything that looks spooky, but don’t ask me to read horror because I scare easily. Weird, I know. I’ve been a voracious reader since I was young. My room was full of books, and now that we have our own house, it’s turning into our own personal library. I used to read crime/thriller books exclusively but that changed last year as my mental health took a dive (there’s a post on the blog if you search for “With A Heavy Heart”). My favourite things to read now lean towards fantasy, science fiction and YA books. I’ll still read the odd thriller though, old habits die hard! To be honest, I’m open to most genres now because a change is as good as a rest. I love coffee, books, winged eyeliner, tattoos, HIM (the band) and the colour black 🖤 Did I leave anything out? Drop me a comment if there’s anything you want to know 😊 #bookstagram #bookblogger #bookreviewer #bookhoarder #goth
So #StormBrendan has definitely made landfall here. Howling wind, lashing rain, it’s actually pretty scary at times. Naturally, I’m hiding inside with a book and coffee 🤷🏻‍♀️ Daisy Jones and The Six by @tjenkinsreid has been on my radar for ages, so I’m looking forward to reading it to see if the hype is true! #books #bookblogger #reviewer #coffee
LOOOOOOOOK at this little beauty from @cauldron.candles.and.soaps 💀🙌🏻 I am here for everything black and witchy, and this cauldron burner speaks to my soul. The black skull melts are aptly named Black Heart, could they be any more me?! I can’t wait to light this later 🖤💀 #cauldron #cauldronsoapsandcandles #skulls #black #goth #blackheart #waxmelts #witchy

A blog for every chick lit lover all over the world