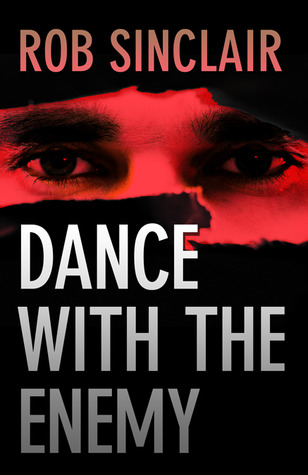 *Thanks to the author for my review copy*

Carl Logan was the perfect agent. A loner. No real friends or family. Trained to deal with any situation with cold efficiency, devoid of emotion. But Logan isn’t the man he used to be, or the asset he once was. Five months ago his life changed forever when he was captured, tortured and left for dead by Youssef Selim, one of the world’s most violent terrorists. When Selim mysteriously reappears in Paris, linked to the kidnapping of America’s Attorney General, Logan smells his chance for revenge. Pursuing his man relentlessly, oblivious to the growing trail of destruction that he leaves in his wake, Logan delves increasingly deep into the web of lies and deceit surrounding the kidnapping. Finally, he comes to learn just what it means to Dance with the Enemy.

Rob began writing in 2009 following a promise to his wife, an avid reader, that he could pen a ‘can’t put down’ thriller.

Rob’s first novel, Dance with the Enemy, was published in June 2014 and is the first in the Enemy Series following embattled intelligence agent Carl Logan. Rise of the Enemy, the second book in the series, was released in April 2015, with the third book, Hunt for the Enemy, being released in February 2016. The Enemy series has received widespread critical acclaim with many reviewers and readers having likened Rob’s work to authors at the very top of the genre, including Lee Child and Vince Flynn.

Rob worked for nearly 13 years for a global accounting firm after graduating from The University of Nottingham in 2002, specialising in forensic fraud investigations at both national and international levels. He now writes full time.
Originally from the North East of England, Rob has lived and worked in a number of fast paced cities, including New York, and is now settled in the West Midlands with his wife and young sons.

Right! Another action thriller review! What makes this one stand out?! CARL LOGAN!!! Exactly what you look for in a main character for these kinds of books! Flawed, tired, battling inner demons and thrown back into work with a bang!

Dance With The Enemy is the start of the Enemy series, and what a stellar opener! I was hooked early on and I couldn’t stop reading! Thankfully (depending on how you look at it!) I was couch-bound with my back when I was reading this so I blasted through it! And the best part? I have the next two in the series to read!

Seriously though, action thrillers are the most fun for me to read. I love the pace, the speed at which the plot can change, the subtle hints at what’s possible happening, and let’s face it, the game of cat and mouse will never get old!

Rob Sinclair has written a superb thriller! Super fast paced, with some excellent characters and a very well thought out plot! Dance With The Enemy is a promising introduction to the Enemy series, and as soon as I have time, I’ll be devouring the next two!

One thought on “Dance With The Enemy by Rob Sinclair”

Finding it hard to enjoy books at the moment. I’ve DNF’d at least 3 this month already 🙈 I was chatting to my husband about it and he suggested picking up Tower of Dawn by Sarah J. Maas as it has absolutely NOTHING to do with what’s going on in the world, and I think this was the right choice. Plus, I only have this and Kingdom of Ash to read and I’ll have the series finished. How are you all finding reading with everything that’s going on?
Now, more than ever, we need to support local small businesses. The current situation means that the economy is precarious, especially for the self-employed. I’m a spring rep for @cauldron.candles.and.soaps and I swear, I’ve never had nicer scented candles than these skull babies 💀😍 Even before I became a rep, I had bought some stuff off Lucy. And I will continue to do so long after my term ends. We need to work together to help, and if you can support small indie businesses, then all the better 🖤 You can still get 10% off your order using my rep code BIBLIO10 🙌🏻 #smallbusiness #shoplocal #cauldronscandles #skulls #goth #gothichome #gothaesthetic
Customized #bookpost from @viper.books today 😍 Thanks so much for sending me #TheResident by #DavidJackson, I can’t wait to read it! 📚 #FearTheResident #ViperBooks
Hey guys! It’s a trying and scary time for us all, especially those who have small businesses. I’m a spring rep for the amazing @cauldron.candles.and.soaps and wanted to explain why! Tireless in her efforts to produce beautiful products, at an affordable price and with speedy delivery, Lucy is the epitome of professional. I can’t recommend her and her beautiful products enough. So please, give her a follow, a like, visit her shop (her link is on her Cauldrons bio) and treat yourself 🖤 You can get 10% off your order using BIBLIO10 at checkout 💀 #smallbusinesses #shoplocal #cauldronscandles #skulls #gothaesthetic #dragons
Go raibh míle maith agaibh @gambit589 and @orbitbooks_uk for this unexpected and awesome #bookpost 📚
Have we had a chat about how cool these @cauldron.candles.and.soaps skull candles are lately?! 💀😍 Because they are B-E-A-utiful, and smell amazing too! 🙌🏻 You can get 10% off using BIBLIO10 at checkout 😉 #cauldroncandles #skullcandle #miniskullcandle #blackandwhite #monochrome #smallbusiness #goth #gothaesthetic