So today is the blog tour for the lovely Louise Beech and her new book, The Mountain In My Shoe and it’s the turn of my new guest reviewer Ellen to take the reigns for today’s stop on the tour! 🙂

A missing boy. A missing book. A missing husband. A woman who must find them all to find herself. On the night Bernadette finally has the courage to tell her domineering husband that she’s leaving, he doesn’t come home. Neither does Conor, the little boy she’s befriended for the past five years. Also missing is his lifebook, the only thing that holds the answers. With the help of Conor’s foster mum, Bernadette must face her own past, her husband’s secrets and a future she never dared imagine in order to find them all. Exquisitely written and deeply touching, The Mountain in My Shoe is both a gripping psychological thriller and a powerful and emotive examination of the meaning of family … and just how far we’re willing to go for the people we love.

You can purchase your copy by clicking HERE.

Louise Beech remembers sitting in her father’s cross-legged lap while he tried to show her his guitar’s chords. He’s a musician. Her small fingers stumbled and gave up. She was three. His music sheets fascinated her – such strange language that translated into music. Her mother teaches languages, French and English, so her fluency with words fired Louise’s interest. She knew from being small that she wanted to write, to create, to make magic.

She loves all forms of writing. Her short stories have won the Glass Woman Prize, the Eric Hoffer Award for Prose, and the Aesthetica Creative Works competition, as well as shortlisting twice for the Bridport Prize and being published in a variety of UK magazines. Her first play, Afloat, was performed at Hull Truck Theatre in 2012. She also wrote a ten-year newspaper column for the Hull Daily Mail about being a parent, garnering love/hate criticism. Her debut novel was a Guardian Readers’ pick for 2015.

She is inspired by life, history, survival and love, and always has a story in her head. Her debut novel, How to be Brave, came from truth – when Louise’s daughter got Type 1 Diabetes she helped her cope by sharing her grandad’s real life sea survival story. Her second novel, The Mountain in my Shoe, will be released in September 2016 and was inspired by her time working with children in the care system.

When she was fifteen Louise bet her mother ten pounds she’d be published by the time she was thirty. She missed this self-set deadline by two months. Her mother is still waiting for the money. 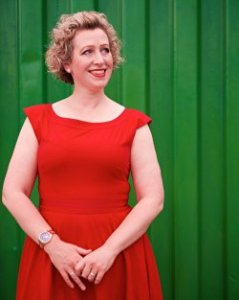 I’ll admit to being nervous about this book as I loved How to be Brave. I needn’t have worried; it was fantastic and I raced through!

A story about two lost and damaged individuals. Bernadette; who is childless and subject to a controlling husband and Connor; a young boy who has been around the block in care homes and foster care. He has two “anchors” in his disruptive existence: art and Muhammed Ali. The name of the book was inspired by the quote: “It isn’t the mountains ahead to climb that wear you out; it’s the pebble in your shoe”. Connor certainly has a lot of mountains to conquer! On the evening Bernadette decides to leave her husband, he doesn’t return home from work. Connor doesn’t arrive at his foster home after school. Where are they? Who would be interested in both these people linked to Bernadette?

The story is interspersed with chapters from Connor’s “lifebook” – a memory book specifically for children in the care system. This lifebook gives us clues along the way into Connor’s background and family history. I didn’t realise this happened so it was an eye opener for me and really made me think about what these kids go through every day.

Louise is such an emotive writer, you can’t help but get wrapped up in the characters and their lives. There is a certain beauty and magic to her words which resulted in me loving this psychological thriller as much as her contemporary fiction. I’m glad to have found a new favourite author in Louise.