Today I’m thrilled to be a part of the blog tour for Mandasue Heller’s new book, Run, and I get to share an extract with you all along with my wonderful guest reviewer Ellen’s review. Firstly though, here’s all the bookish info:

After being cheated on by her ex, Leanne Riley is trying her hardest to get her life back on track, which isn’t easy without a job and living in a bedsit surrounded by a junkie and a mad woman.

On a night out with her best friend she meets Jake, a face from her past who has changed beyond all recognition. Jake is charming, handsome and loaded, a far cry from the gawky teenager he used to be. Weary of men, Leanne isn’t easy to please, but Jake tries his best to break through the wall she’s built around herself.

But good looks and money can hide a multitude of sins. Is that good-looking face just a mask? And what’s more, what will it take to make it slip, and who will die in the process…?

Run is published on January 12th and you can click HERE to pre-order your copy! 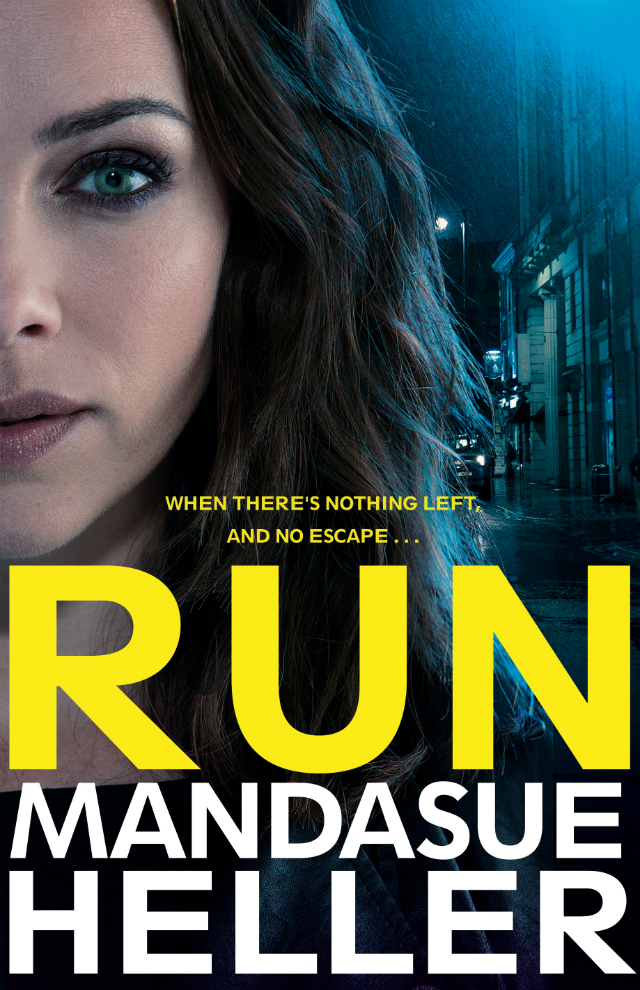 Mandasue Heller was born in Cheshire and moved to Manchester in 1982. She spent ten years living in the notorious Hulme Crescents which have since become the background to her novels. Not only is she a talented writer, but she has also sung in cabaret and rock groups, seventies soul cover bands and blues jam bands. She still writes and records with her musician partner between books, and their music can be found in Amazon’s music store.
You can also connect with Mandasue on Facebook and Twitter.

She shivered when the moon disappeared behind a thick bank of clouds, plunging them into inky darkness. Rain began to spatter the windscreen as the car tyres bounced slowly over the cobbles, and the sudden swish of the automatic wipers made her jump. Hugging herself, she gazed up at the rear windows of the derelict row of shops to her left and the uninhabited terraced houses to the right. Most were concealed behind metal sheeting or smashed, and they were all as dark as the alleyway they were driving into, which told her that there was no one around to help her.
He eased to a stop alongside a padlocked gate halfway along the alley and cut the engine before jumping out and walking quickly around to her side. An icy blast of wind whipped her cheeks when he opened her door, and her legs felt like jelly as she unhooked her seat belt and climbed out.
‘Don’t even think about it,’ he warned, gripping her tightly by the arm when he caught her casting a surreptitious glance back down the alley in search of an escape route. ‘I don’t want to hurt you, but I will if I have to.’
‘You already are,’ she replied shakily, wincing at the pain of his fingertips digging into her flesh.
He let go after a moment, and she rubbed at the sore spot as he turned and slotted a key into the padlock. The gate opened on to a rubble-filled yard at the rear of an empty shop unit, and he waved for her to go in ahead of him.
‘I can’t,’ she croaked, taking a stumbling step back. ‘It’s too dark. There could be rats.’
A squeal of fear escaped her lips when he seized her by the wrist and hauled her into the yard, and tears flooded her eyes when her ankle twisted painfully as he marched her across the debris. He stopped at the steel back door and unlocked it with a mortice key before shoving her into a tiny, pitch-dark hallway. A steep flight of stairs faced them, at the top of which was another door.
The hallway reeked of mildew and rotten food, but when they reached the top of the stairs and he opened the door, an even fouler smell hit her in the face. Covering her nose with her hand, she stumbled over the threshold into the flat above the shop.
The front room was dark, but the moon had emerged from behind the clouds and tiny pinpricks of light were leaking in through the holes in the metal covering the window. As her eyes began to adjust, she was able to make out the outlines of a sofa, a single bed, a cluttered coffee table, and what appeared to be an upturned cardboard box holding a portable TV.
Behind her, he locked the door and then slid his hand along the wall in search of the light switch. Squinting in the unexpected brightness, she inhaled sharply when her gaze landed on the origin of the putrid smell.
‘Oh, my God!’ she cried, staring in horror at the battered body sprawled on the floor between the sofa and the window. ‘Is she . . .’
‘Dead?’ he finished for her. ‘I’d say so, judging by the stench she’s giving off. Not that she was too bothered about hygiene when she was alive,’ he went on, a glint of disgust flaring in his eyes as he gazed down at the body. ‘And she actually thought I’d be interested in a skank like her. What a joke!’
‘I don’t understand.’ She stared at him as if she’d never seen him before. ‘What did she do to deserve this?’
‘She couldn’t keep her big mouth shut,’ he replied, gazing coolly back at her. ‘And the other one’s lucky she was out when I called round there, or she’d have got the same.’
‘Is that why you’ve brought me here?’ she asked. ‘Are you going to kill me, too?’
He opened his mouth to speak, but the sound of a brick knocking against another in the yard below made him snap his head around.
‘What are you doing?’ she gasped, her voice rising to a squeak when he yanked a gun out of his pocket.
‘Shut your mouth!’ he hissed, pushing her out of the way and rushing over to the window. Straddling the body, he pressed his face up against the glass and peered through a hole in the metal sheeting. Several shadowy figures were moving through the darkness below, heading towards the door. A bright light suddenly flared, causing him to wince as it hit his eyes.
‘Armed police . . .’ a voice boomed. ‘Come out with your hands in the air!’
‘We’ve got to do as they say,’ she sobbed, her legs shaking wildly as she backed towards the door. ‘They’ll shoot us both if you make them come in! Please . . . I’m begging you!’
The vibration of a battering ram being repeatedly smashed into the steel door shook the floor beneath their feet, and she almost wet herself with terror when, seconds later, footsteps began to thunder up the stairs.

Mandasue Heller is a new author to me and this urban thriller certainly packs a punch. With an opening chapter that pulls you right in, I knew that I was in for a treat.

Leanne Riley is down on her luck and living in a grotty flat when she meets Jake, an old school acquaintance who has carried a torch for her since then, on a night out with her best friend Chrissie. She is quite a guarded character due to being cheated on in the past but Jake soon wins her over. Jake appears to be the blue eyed boy of the tale but if something seems to good to be true…alarms bells were ringing for me!

Leanne’s best friend Chrissie is central to the story; I’d go so far as to say it gives a “chick lit” (albeit a gritty one!) feel to the book. Their relationship and personal lives resulted in me investing in them both and waiting to see how they would cope with everything that was coming their way. They are both put through the mill throughout!

A book featuring sex, violence, drugs and betrayal but underneath all that is friendship and what people will do when they are pushed to the brink. Four stars from me.

Huge thanks to Macmillan for having us on the blog tour for Run.

Make sure to keep up with the tour: 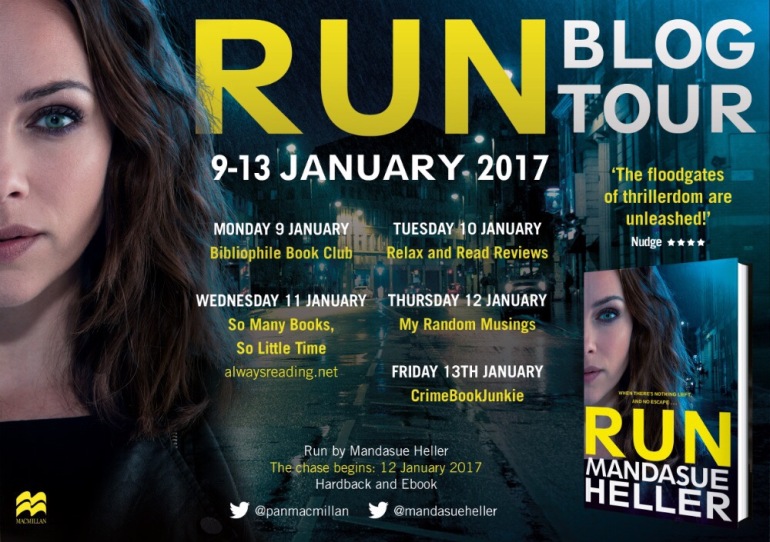 One thought on “*Blog Tour* Run by Mandasue Heller”