Absolutely thrilled to be on the blog tour for Evil Games by Angela Marsons today and I have a fab guest post for you all! First though, here’s all the bookish info you need:

The greater the Evil, the more deadly the game…

When a rapist is found mutilated in a brutal attack, Detective Kim Stone and her team are called in to bring a swift resolution. But, as more vengeful killings come to light, it soon becomes clear that there is someone far more sinister at work.

With the investigation quickly gathering momentum, Kim finds herself exposed to great danger and in the sights of a lethal individual undertaking their own twisted experiment.

Up against a sociopath who seems to know her every weakness, for Detective Stone, each move she makes could be deadly. As the body count starts to mount, Kim will have to dig deeper than ever before to stop the killing. And this time – it’s personal.

Out on Jan 27th and published by Bonnier Zaffre, click HERE to get your copy!

Angela Marsons is the author of Amazon #1 Bestseller SILENT SCREAM.

She lives in the Black Country with her partner, their bouncy Labrador and a swearing parrot.

She first discovered her love of writing at Junior School when actual lessons came second to watching other people and quietly making up her own stories about them. Her report card invariably read “Angela would do well if she minded her own business as well as she minds other people’s”.

After years of writing relationship based stories (My Name Is and The Middle Child) Angela turned to Crime, fictionally speaking of course, and developed a character that refused to go away.

And now, read on for Angie’s brilliant guest post…

Writing about a Sociopath

I have always been intrigued by the sociopathic personality and their ability to hide in plain sight.  The Sociopath is charming and clever and unencumbered by the ties of human relationships.  It is difficult for normal emotionally driven people to imagine being able to act and behave any way or do anything without the fear of remorse or guilt.

When Evil Games was first submitted to publishers it was rejected primarily because the character of Alex was deemed ‘not believable’ and I was asked to soften her up, give her a weakness, a vulnerability.  I had to refuse as this was my whole point of writing the book and my wish to represent a sociopath factually.

It is true that not all sociopaths are murderers but they all want what they want.  If a sociopath wants the sandwich you’re eating they will care nothing for simply taking it from you.  It is what they want and see no reason why they shouldn’t take it.

My favourite scenario that demonstrates the true nature of a sociopath is this.  Imagine looking in your purse and having only enough money for a morning coffee or your child’s lunch at school.  A sociopath will choose the coffee.  When questioned later the sociopath will apologise profusely claiming that tiredness, stress, forgetfulness was the reason for the oversight.  A true sociopath would be able to induce sympathy for their plight because as normal people, we would find the idea of it being a deliberate act completely intolerable and would therefore make excuses.  ‘She couldn’t have chosen coffee over her child’s lunch’. ‘It must have been a mistake’.  This is the reason sociopaths move unnoticed amongst us.

An intriguing misconception is that sociopaths want to ‘get better’. But they are not ill.  Sociopathy is not a mental illness and can not be treated.  A conscience can’t be taught or surgically attached.  Additionally, sociopaths don’t feel at a disadvantage by being free of human connections and bonds.  They have no frame of reference.  It is like trying to explain the colour of the sky to someone who has never had the gift of sight.

I deliberately chose the sociopath in Evil Games to be a woman as this goes against every preconception we have of loving and nurturing and yet there is no evidence to suggest there are less female sociopaths than male.

In Evil Games I was eager to explore the relationship between Alex and Kim.  Both strong and intelligent women who can not help but be fascinated by each other.  I wanted a real psychological cat and mouse game where each is constantly trying to outwit the other.  The scenes between the two of them were amongst my favourite scenes to write as I often had no idea how they would go.

I have received more messages about Alex than any other character except for Kim.  People are both repelled and fascinated by her at the same time.  And as her creator I am no different to anyone else.

Huge thanks, as always, to Angela for this fascinating guest post! 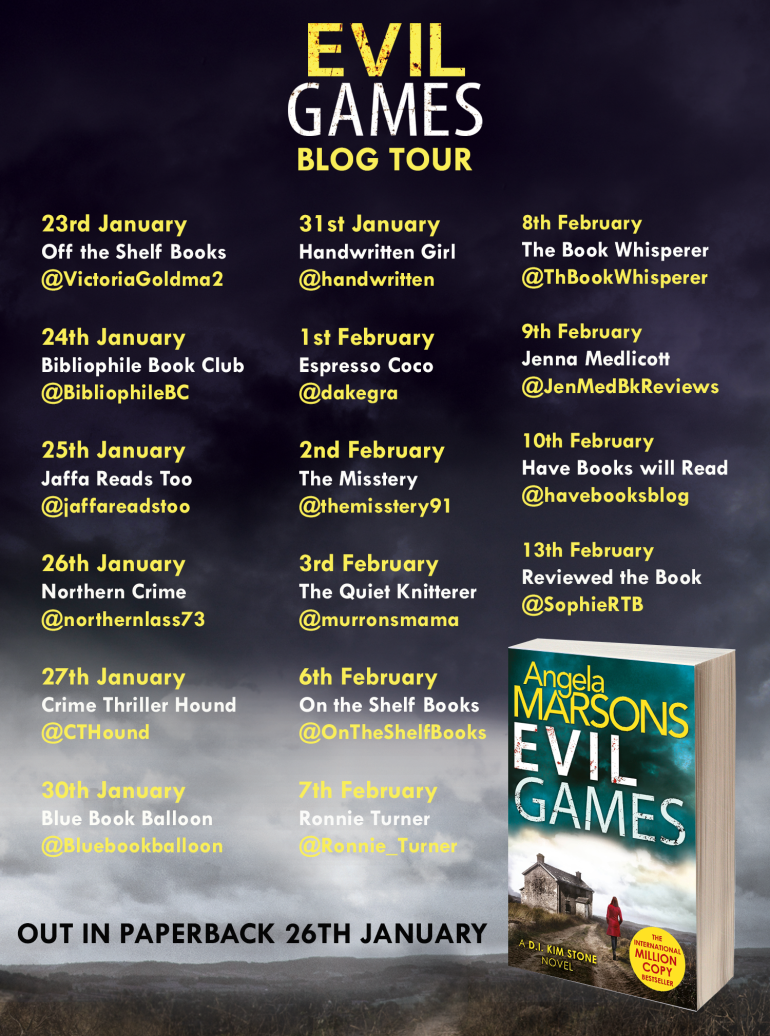