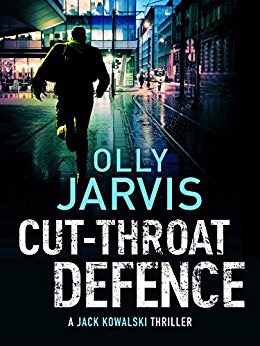 *Many thanks to the author for my review copy*

There is no man richer than a man without a price
Jack Kowalski is a young and newly qualified barrister, who finds himself working on the biggest drugs importation trial ever played out on English soil. With the assistance of his equally inexperienced instructing solicitor, Lara Panassai, Jack argues a savage ‘cut-throat’ defence – a risky tactic where the defendants blame each other – and quickly embroils some of the most eminent QCs in the land.

As the son of Polish immigrants, the sensitive Kowalski has always found it hard to fit in, with a sense of inferiority and constant nervousness in Court. Now he must face his demons and fight not only for his clients, but for his very future at the Bar.

But when the defendant then unexpectedly absconds, Jack and Lara must fight on regardless, following a tip that leads them out of the courtroom and into Manchester’s seedy underworld – crime bosses, strip clubs, corrupt lawyers and all manner of hidden sins.

As the case grows darker with each new discovery, who in this viper pit of deception can Jack and Lara trust?

I do enjoy a legal thriller, so when I saw Cut-Throat Defence popping up around publication day, it planted itself firmly on my radar!

Following Jack Kowalski as he is thrown into his first high profile case with Lara Pannasai, Cut-Throat Defence is a pretty twisty legal thriller. I’ll be the first to admit that not being from the UK, I don’t have a great understanding of the legal system so I found myself a bit confused on occasion, but that in no way deterred from the story for me.

Jack is a novice, but he’s smart. Under pressure though, he has a tendency to cave and freak out. When the man he is representing absconds from their supervision, Kowalski is in even bigger trouble. How can he defend a man that isn’t there?

There is corruption, murder and so many secrets that it’s hard to know who to believe. Cut-Throat Defence is a decent read, and its pace and short chapters will keep you turning the pages.

If you enjoy legal thrillers than definitely give this one a shot!