The young girl you have found isn’t the first experiment I’ve carried out. She won’t be the last.

A tense, unpredictable crime debut that will not only have you gripped, but will chill you to the bone. Perfect for fans of Stuart MacBride and Mark Billingham.

A serial killer is stalking the streets of Liverpool, gruesomely murdering victims as part of a series of infamous, unethical and deadly psychological experiments.

When it becomes apparent that each victim has ties to the City of Liverpool University, DI David Murphy and DS Laura Rossi realise they’re chasing a killer unlike any they’ve hunted before – one who doesn’t just want his victims’ bodies, but wants their minds too.

Luca Veste is a writer of Italian and Liverpudlian heritage, married with two young daughters, and one of nine children. He studied psychology and criminology at university in Liverpool. He is the author of the Murphy and Rossi series, which includes DEAD GONE, THE DYING PLACE, BLOODSTREAM, and THEN SHE WAS GONE.

Part psychological thriller, part police procedural, his books follow the detective pairing of DI David Murphy and DS Laura Rossi. The novels are set in Liverpool, bringing the city to life in a dark and terrifying manner…with just a splash of Scouse humour. 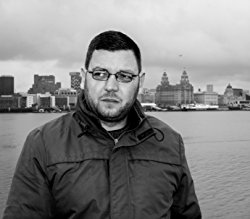 Ok. So, in doing up this post, I’ve learned two things. A) I’ve had Dead Gone on my kindle since 2014!!!!!! and b) I have been seriously missing out on what looks to be a really solid crime series!

Dead Gone is the first in the Liverpool-based Murphy and Rossi series. It follows their investigation into a psychopathic serial killer who seems to be targeting people who have ties to the City of Liverpool University.

I have to say, I was gripped early on thanks to Luca Veste’s writing style. There’s something there that just hooks the reader and keeps them turning the pages and I was no exception.

I loved the characterisation too. Murphy sounds like an absolute giant of a man, but he’s been through a lot, so there a level of vulnerability there that makes him very endearing. He’s not your typical male lead that you read so often in books, and I really likes him as a character. Rossi also seems like the perfect equaliser for him. A strong woman and capable of picking up even the subtlest of nuances in her partners demeanour.

I’m not going to go into the plot. As per. I thought I had it all figured out, more than once. And I was wrong. Prove me wrong and you have a reader for life! The serial-killer/ antagonist in Dead Gone is twisted. The experiments they carry out are dark, and creepy and oddly compelling in their reasoning.

All in all, a belter of a start with Dead Gone. This one was on my personal TBR hence it took me so long to read it. I have the others though, and I won’t be waiting years to get to them, that’s for certain!

Safe to say you have a new fan Mr. Veste.