Today is my stop on the blog tour for Relics by Tim Lebbon and I get to share an excerpt with you all. First though, here’s the bookish info! 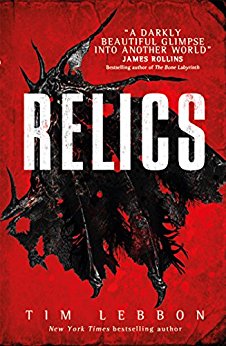 Beneath the surface of our world, mythological creatures and their artifacts still exist—corrupt people pay fortunes for a sliver of dragon bone, a basilisk’s scale, or an angel’s wing. Angela Gough is an American criminology student in London whose fiancé Vince disappears, and her investigation leads her into a black market specializing in arcane relics. She meets Mary Rock, a criminal of mythic status who also wants to find Vince… to kill him. Angela and a growing team of adventurers must stop this horrific trade, yet they face a growing menace as the hunted creatures begin to fight back.

Tim Lebbon was born in London in 1969. He has been writing ever since he can remember. The first story he recalls actually finishing was when he was nine years old. It involved a train hijacking, and one of the hijackers being clumsy enough to drop his gun. Naturally the hero found the gun and went on a killing spree. Die Hard on the 10:17 from Paddington.

His first published story was in the UK indie magazine Psychotrope in 1994, and in 1997 Tanjen published his first novel Mesmer. Since then he’s had almost thirty books published in the UK and US by Bantam Spectra, Allison & Busby, Night Shade Books, Simon & Schuster, Leisure Books, PS Publishing, Necessary Evil Press, Cemetery Dance and many others.

Quite a few of his novellas and novels have been optioned for the screen, including White, Exorcising Angels, Until She Sleeps, Face, In Perpetuiry, and The Nature of Balance. 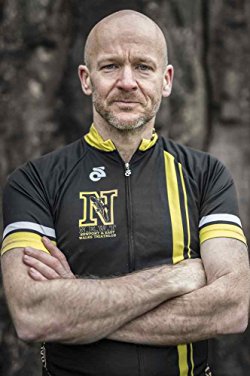 Don’t try to touch it,” Mary said, and she wasn’t even slightly out of breath. “It’s protected by an electronic field, so you’ll get electrocuted.”

“What do you mean, Vince isn’t dead?” Angela’s thoughts were in turmoil. Her skin tingled, her insides buzzed as if from electricity. Can I really afford to believe? She wanted to sit down and gather herself, center her emotions, and try to pin down exactly what was happening here, but Mary would not stop. So Angela had no choice but to follow.

“Just what I said,” she said, “but we’ll talk more about him later.” She said “him” as if spitting a vile taste from her mouth.

“If you discuss with anyone what you’re about to see, they’ll never believe you. You’ll be regarded as a fool. Mad. And you’ll put yourself in terrible danger.”

The attic was lit by a couple of bare bulbs, and there were no nods to aesthetics. Not even carpet. Mary crossed the open space and paused by an innocuous wooden door. It looked old, warped in its frame, but Mary lifted a small timber hatch to reveal an electronic lock pad.

“Make no sudden movements,” she said, fixing Angela with her gaze.

Angela smiled uncertainly, holding back a laugh. The smile slipped when Mary’s stare did not alter.

“What have you got in there?” she asked softly.

“I told you.” Mary tapped in a code. Angela tried to watch, but the woman shielded the pad with her body. The door hissed open. The timber was merely the facing to a modern metal door, with multiple locks and several small, purple lights that ran down its leading edge and must have been some form of alarm. She stepped through.

Angela followed her inside, and the door whispered shut behind them.

The room was lit by a subdued, bluish light, smoothing the bare walls and ceiling and washing across the lowered area that took up more than half the space. The two of them stood on a narrow walkway, and in a sunken pit below them—beyond a fence of narrow electrical wires on porcelain stems—was the fairy.

It was old, dusty and dead, just like the angel she had seen at Fat Frederick’s place. Coming in here, Angela had held only a shred of doubt, and as she stood there and stared, everything she had so recently experienced winnowed that doubt down to nothing.

The fairy was the size of a toddler, probably no more than three feet tall. It was displayed curled in on itself as if asleep, its graceful hands folded beneath its head, athletic legs drawn up so that its knees almost touched its chest. Even in death it retained an ethereal beauty, but there was also something troubling about the remains.

Angela moved slightly to the side and crouched a little, looking closer at its face. The creature wore a frown, fossilized there forever and giving it an eternally sad visage. She wondered how it had died. She wondered who or what had killed it.

“It is,” Mary Rock whispered.

One thought on “*Blog Tour* Relics by Tim Lebbon”