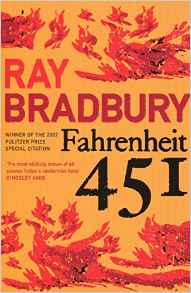 Guy Montag is a fireman. His job is to burn books, which are forbidden, being the source of all discord and unhappiness. Even so, Montag is unhappy; there is discord in his marriage. Are books hidden in his house? The Mechanical Hound of the Fire Department, armed with a lethal hypodermic, escorted by helicopters, is ready to track down those dissidents who defy society to preserve and read books.

Fahrenheit 451 was one of this month’s book club choices on the Rick O’Shea Book Club and I had it on my bookshelves so I figured now was as good a time as any to get reading it.

It’s a relatively short book, probably even readable in one sitting, but it took me a couple of days to get through for various reasons.

I didn’t know what to expect going into it. I just remembered something about burning books when I had read about it previously. I have the anniversary edition, pictured above, so I’m going to give some advice. DO NOT READ THE INTRODUCTION! It contains spoilers for the book, which I only found out about AFTER I read it!

I think this slightly spoiled it a little for me because it meant I knew partly what to expect. In saying that, Fahrenheit 451 wasn’t a bad read. But I do think the majority of it went a bit over my head. I don’t tend to read classics, of any description, and this being written years ago meant it didn’t grab me.

I don’t know what I’ve read. And if it wasn’t for Rick I don’t know when I’d have picked it up. I can’t say that I loved it as the majority of it just passed me by. I don’t think that I got it to be honest.
I’m glad I read it though. I think if you like sci-fi/dystopian fiction, then you’ll enjoy this one!

15 thoughts on “Fahrenheit 451 by Ray Bradbury”

Picked up #Fire and #Bitterblue by @kristincashore from @ballybanelibrary today 📚
Thank you so much @orendabooks for this gorgeous signed indie copy of #Winterkill by @ragnarjo
Hey @deadgoodbooks thanks so much for this brownie surprise 😍
#56Days by Catherine Ryan Howard
Library book holds are a great way to start a week (yesterday was a bank holiday in Ireland!) 🎉📚
Recently purchased books 📚
coffeeinonehandbookintheother.wordpress.com/
A Cat, A Book, and A Cup of Tea
Varietats