In another of my author Q&A posts, today sees the turn of Daniel Culver. Daniel was recently signed to new publishers, Manatee Books so I’m thrilled that he’s taken the time to answer my questions! 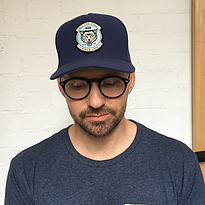 Daniel Culver is a writer and editor, currently living and working in east London, having spent his formative years fluttering between the council estates of Essex and the wilds of Asia and the Americas.

He is an alumnus of both Faber Academy and Curtis Brown Creative and his quirky, crime debut will be published in March 2018.

I’m a writer from North London – originally from Essex – and I’m due to publish my debut novel with Manatee Books early next year. I’m a single parent and I also have two cats. I left school when I was fifteen with no qualifications; I didn’t care much for school, though, I always wanted to be a writer. It was around this time I wrote my first book on an old typewriter my mum bought me, but I gave up half-way through (authors DNF too). I’m an editor now (which is ironic considering I couldn’t spell for toffee as a teenager).

I’ve always loved film and television and, despite being school-averse, I’ve always loved creating things. I used to write song lyrics as a kid and was in a few bands (which were terrible), but I enjoyed the wordplay. Writing novels is just an extension of that (and also a clichéd two fingers up to all of the teachers and peers who thought I’d probably be a crack addict by now).

How did you hear about Manatee Books and can you tell us about your journey with them so far?

I started shopping my debut novel – White Midnight – around and I’d just joined Twitter as well. Not long after, I saw a bunch of tweets mentioning this new venture, and everyone had nothing but praise for Lisa and Liz (L2). So I sent them a couple of chapters and they wrote back the following day and asked to see more. Two days after submitting they contacted me and said they’d like to work together, which was amazing, and I was blown away by their efficiency; they had clearly ready the whole manuscript, and despite having interest elsewhere, Manatee felt like the perfect fit for my novel and me – they have been so supportive. (Also, I once met two Manatee Scientists in Guatemala and we bribed the guards of Tikal – the Mayan temple – then spent the night there, where I learned all about Manatee conservation, so I liked the name, too). Plus, I’ve always been drawn to indies and I know my novel is on the quirky side of commercial, so it was great to have someone respond so well to it; there was no doubt either side, which is quite rare in this business.

I’m not actually sure, to be honest. I definitely have an abstract mind and absurd things just come into my head at random times of the day. I usually get told off for saying them out loud, so writing them down gives me the luxury of editing them later. I’m definitely drawn to the seedier side of life (as a writer, I mean). I’ve also lived in some colourful places and have done a lot of travelling, so I have a lot stored mentally and things usually just fall out on their own. Mainly ideas for characters or strange situations that drive the story.

How would you describe your writing?

Odd, abstract. Slightly quirky. If I had to place it within the realm of publishing, I’d say I wrote literary thrillers / literary crime with a satirical bent.

I used to be social media-averse, but after being urged to join Twitter, I see how invaluable it is for writers and the publishing industry, also. Some writers go OTT with self-promotion, which I am not so keen on, but it’s a great platform to share and writer folk seem to be incredibly supportive of one another, which is great. I’ve definitely been won over.

Making stuff up. It’s like a puzzle you create for your own amusement – you spend months creating these obscure vignettes; pieces that don’t seem to fit together, and then you’ll pull something out of the hat – this little strand sprinkled with magic – and suddenly everything fits together and then you sit and feel smug about it for five minutes … until you find another hole that needs plugging.

Definitely waiting. Everything in publishing is so slow and I have limited patience and a short attention span, which means I’m already thinking about the next thing I’m going to write.

I’d like to have a few books under my belt, maybe some teaching, too. I’ve learned so much from being part of the Faber Academy and have had a pretty unique route to becoming published, so think I’ve got a fair bit to share. Also a movie deal. I would absolutely love to force my opinions on a director and make them ‘let me’ write the screenplay.

I’ve just finished the first draft of my second book and have (at least) two more up my sleeve, so I’ll just keep going until someone tells me to stop. I’ve also just written my first short story, which was a big challenge, as I do like to go on.

I tend to read in bouts. When I was younger, I used to read a lot – mainly Tintin, and then everything John Grisham and Ben Elton had written. Now I’m pretty selective and I tend to be drawn toward the literary side of crime: anything from transgressive fiction to Booker winners.

Favourite book ever is probably The White Tiger by Aravind Adiga; top five would be that, plus No Country for Old Men, Shutter Island, The Silence of the Lambs and The Sisters Brothers.

Fight Club – such a simple idea that became a phenomenon. Or Fifty Shades (for the cash, of course).

I work as an editor, so if I’m not writing, usually I’m editing something, or reading. That or playing with my cats.

I cycle, go to the gym; I used to surf and have travelled a lot, but writing two back-to-back books has left me a veritable hermit for two years.

I really don’t know. I tried to be an artist once, but gave up because the artworld is run by cretins who know nothing about art. I was never very academic, but I just love how language can be manipulated in a million different ways, to convey a million different things. I think writing a mystery novel is the ultimate puzzle, not just for the reader, but the writer, too. Ultimately, I was just not good enough at anything else, while writing feels comfortable and even when I look over the huge literary fuck-ball of my first vomit draft, I still feel like I’m in complete control.

Huge thanks to Daniel for taking part, and of course to Liz and Lisa at Manatee Books for setting this up! 🙂

Manatee Books was set up in 2017, by best-selling author Lisa Hall in conjunction with blogger turned freelance publishing guru Liz Barnsley.  Their aim is to bring top quality fiction to the digital market. They are a small outfit, intent on publishing only the best of crime and women’s fiction. Their focus is on building the author brand, ensuring that all of their authors receive bestseller treatment through a strong marketing strategy and the knowledge that the Manatee Books team are there to support them through the entire publication journey.

Thanks @orbitbooks_uk @gambit589 #TheWheelOfTime
#bookpost
Halloween 2021 👻🎃🦇💀
Books read in September 2021 📚
#bookpost
I finished painting the library/dining room today. Really pleased with how it’s turned out. I’m sure I’ve missed spots, but I don’t care at this stage because it’s done 😆
coffeeinonehandbookintheother.wordpress.com/
A Cat, A Book, and A Cup of Tea
Varietats