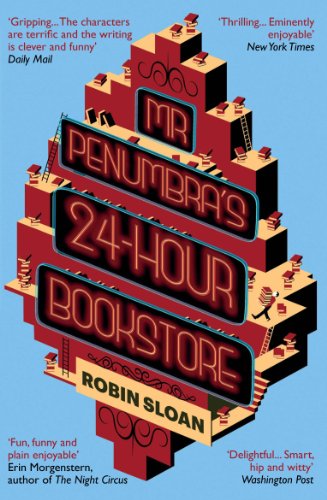 Recession has shuffled Clay Jannon out of his life as a San Francisco Web-design drone – and serendipity, coupled with sheer curiosity, has landed him a new job working the night shift at Mr. Penumbra’s 24-Hour Bookstore. But after just a few days, Clay begins to realize that this store is even more curious than the name suggests. There are only a few customers, but they come in repeatedly and never seem to actually buy anything, instead they simply borrow impossibly obscure volumes from strange corners of the store, all according to some elaborate, long-standing arrangement with the gnomic Mr. Penumbra. The store must be a front for something larger, Clay concludes, and soon he’s embarked on a complex analysis of the customers’ behaviour and roped his friends into helping to figure out just what’s going on. But once they bring their findings to Mr. Penumbra, it turns out the secrets extend far outside the walls of the bookstore…

This little gem of a book was hiding on the second last page on my kindle (page 126, so you can do the maths as to how many books are on there!), so I’d obviously had it on there for quite some time. 4 years to be exact, as I’ve just checked my kindle orders and I bought it back in 2013. I fancied cheating on my TBR and Mr Penumbra’s 24-Hour Bookstore was what I chose back in late June.

We meet Clay Jannon, who used to be a web designer, but then the recession hit. On the lookout for a new job, he comes across a sign for work in Mr. Penumbra’s 24 hour bookstore ad he ends up getting the job. Assigned to the late shift, Clay settles in to what he thinks will be a boring and quiet job, but it turns out to be anything but!

Strange customers, an unusual book stock and an enigmatic employer means that Clay becomes very curious about those who visit this bookstore. Upon further investigation, Clay learns that the store holds almost as many secrets as it does books.

What follows is a quest for the truth with elements of mystery and intrigue way beyond what I was expecting when I started the book. There is something about Mr Penumbra’s 24-Hour Bookstore that made me smile many times while I was reading it. The characters, the plot, everything was just so enjoyable that it was hard not to love this one!

#birthdaybooks 📚
35 today 🥳
#bookpost
#currentlyreading
Books read in April 2021 📚
Finally got myself a book cart 😍📚
coffeeinonehandbookintheother.wordpress.com/
A Cat, A Book, and A Cup of Tea
Varietats