Today I’m thrilled to be one of the final stops (along with Tony over at Mumbling About…) on the mammoth blog tour for The Other Twin by L V Hay and I get to share a Q&A I did with Lucy recently, First though, the all-important bookish information!

When India falls to her death from a bridge over a railway, her sister Poppy returns home to Brighton for the first time in years. Unconvinced by official explanations, Poppy begins her own investigation into India’s death. But the deeper she digs, the closer she comes to uncovering deeply buried secrets. Could Matthew Temple, the boyfriend she abandoned, be involved? And what of his powerful and wealthy parents, and his twin sister, Ana? Enter the mysterious and ethereal Jenny: the girl Poppy discovers after hacking into India’s laptop. What is exactly is she hiding, and what did India find out about her? Taking the reader on a breathless ride through the winding lanes of Brighton, into its vibrant party scene and inside the homes of its well- heeled families, The Other Twin is a startling and up-to-the-minute thriller about the social-media world, where resentments and accusations are played out online, where identities are made and remade, and where there is no such thing as truth …

Published by Orenda Books, The Other Twin is available NOW, and you can get your copy by clicking HERE. 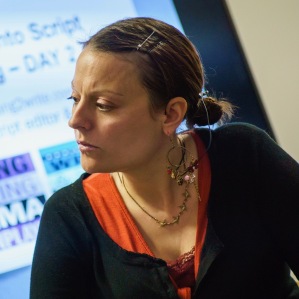 Lucy is an author and script editor, living in Devon with her husband, three children and six cats. Lucy is the associate producer of Brit Thrillers Deviation (2012) and Assassin (2015) both starring Danny Dyer. See Lucy’s IMDB page HERE and other movies and short films she’s been involved in, HERE.

In addition to script reading and writing her own novels, Lucy also blogs about the writing process, screenwriting, genre, careers and movitivation and much more at her blog Bang2write, one of the most-hit writing sites in the UK. Sign up for updates from B2W and receive a free, 28 page ebook (PDF) on how NOT to write female characters, HERE or click the pic on the left.

Hi! My name is Lucy V Hay (sometimes LV Hay!) and I’m an author, script editor and blogger who helps writers. I’m owner of the writing tips and networking blog www.bang2write.com, which was shortlisted for the UK Blog Awards this year, as well as named Feedspot’s number 1 screenwriting blog in the UK (tenth in the world).

As a script editor, I’ve been privileged to work on a number of fab and award-winning British projects, both feature and short film. I’ve written books about screenwriting, plus I’m also a novelist – my crime debut is out now with Orenda Books and is called The Other Twin.

I’ve always wanted to be a writer, ever since I was a little girl. I wrote my first ‘book’ in the middle of my Maths homework book when I was about eight. It was called DUSTCART GEORGE and it was about a girl who ran away from home and had her own dustcart sweeping up the streets in London. I did my own illustrations too! Needless to say, my Maths teacher was not very happy though she did say she enjoyed the story, so job done.

Everywhere, both in real life and online. There’s always new perspectives and ideas and thought patterns … This is why I love social media so much. There’s always someone sharing their POV, or a snippet from their lives, or a character from history … Whilst it’s true social media can be an extended whingefest and full of people’s pictures of their dinner, I make sure I follow the ‘right’ people … By ‘right’ I mean anyone who might challenge my little bubble and make me think of something differently, rather than abject trolls!

I would call it ‘dark and lyrical’. Dark, because I am obsessed with the reasons people do and say terrible things to each other; no one wakes up in the morning and says, “Today I will be as evil/careless/selfish etc as possible”. I’m also interested in notions of redemption and whether it’ possible to be ‘good’ after being ‘bad’ – and whether society will let you!

Lyrical, because I am also obsessed with the craft of writing, right down to what words are chosen. I want my work to be literary, but also accessible. I want to bring forth visual tales like my hero, Doris Lessing who was so skilled at ‘word pictures’. That’s the dream.

Absolutely. Blog tours, tweets, author spotlights, Instagram features, Facebook Q&As, guest posts … they all work in getting a book out there to the readers. The important thing to remember is they are cumulative. In marketing, it’s said the average consumer is exposed to a product like a book four times before they buy it. Also, referrals are so important – people buy your book if they see people they like/follow endorsing it, whether that’s another author or a book blogger (preferably both). This notion you tweet a few times and get an Amazon bestseller simply doesn’t add up!

Writing. I’m so lucky to be able to do what I love as my actual job.

Writing. I hate it so much! (haha). As you might guess, I have a bit of a love/hate thing going on here.

I would love to have had a number of bestselling books and hopefully, a movie or TV adaptation of at least one of them. I’ve also always wanted to write a dystopian series for teenagers. But really, more of what I’m doing now: writing, workshops, blogging, etc!

Book 2 for Orenda. No title yet and still working on the rewrites. Also, my latest writing book this September, WRITING DIVERSE CHARACTERS FOR FICTION, TV AND FILM, which will be published by Oldcastle Books as part of its Creative Essentials range. This will be my third in the series, but my first where I include novel writing too rather than just screenwriting.

I adore reading; I try to read at least one book a week. I think it’s really important writers read – I would even wager real money that the best writers (in a craft sense) are the most well-read (whatever that means). I also think the best writers are the most open-minded and challenge themselves the most in terms of what they read. It can be tough to read outside of your comfort zone, but very rewarding. For this reason, I try to set myself pledges on what to read.

Can you tell me your all-time favourite book, or if you have to, your top 5?

Argh, I have so many favourites … and so many fave 5s! I suppose the book that changed my life was probably Maya Angelou’s I Know Why The Caged Bird Sings.

So many. But I wish I had written GONE GIRL, if only to get a naked Ben Affleck in the shower.

Spending time with the kids. Reading. Baking. Going for drive, watching movies, hanging out. Nothing earth shattering but it’ the little things I think.

I like to take pictures, especially of nature and my 5 cats.

I love Harlyn Bay, in Padstow. The beach is gorgeous and I love standing out on the headland there and watching the tide come in.

Depends on the day! But overall, probably chocolate. All of it. Give it to me!

Booze! At the moment, gin. Though it goes through phases … Ale is a favourite, being a Devon gal.

Well I was a teacher for a bit. I’ve also worked in other places like telemarketing, supermarkets,  cafes, waitressing, even marketing via sandwich boards and in a giant bear costume! Writing wins hands down over all of these.

Many thanks to Lucy V Hay, Anne Cater and Orenda Books for having me on the blog tour for The Other Twin!

Catch up on the blog tour with all of these wonderful blogs:

💀 Good morning 💀
Thanks so much @viper.books for this lovely surprise #bookpost 🐍📚
Monday blues 💙
Decided to buy myself a book and #ACOSF seemed like a good choice. Now I just need to find the time to read it, and also wrack my brain to remember the plots of the previous four books 🙄😂
#currentlyreading
Books read in March 2021 📚
coffeeinonehandbookintheother.wordpress.com/
A Cat, A Book, and A Cup of Tea
Varietats