*Many thanks to Stevie at Gollancz and Ed McDonald for my signed and doodled proof copy!*

The republic faces annihilation, despite the vigilance of Galharrow’s Blackwings. When a raven tattoo rips itself from his arm to deliver a desperate message, Galharrow and a mysterious noblewoman must investigate a long dead sorcerer’s legacy. But there is a conspiracy within the citadel: traitors, flesh-eaters and the ghosts of the wastelands seek to destroy them, but if they cannot solve the ancient wizard’s paradox, the Deep Kings will walk the earth again, and all will be lost.

The war with the Eastern Empire ended in stalemate some eighty years ago, thanks to Nall’s ‘Engine’, a wizard-crafted weapon so powerful even the Deep Kings feared it. The strike of the Engine created the Misery – a wasteland full of ghosts and corrupted magic that now forms a No Mans Land along the frontier. But when Galharrow investigates a frontier fortress, he discovers complacency bordering on treason: then the walls are stormed, and the Engine fails to launch. Galharrow only escapes because of the preternatural magical power of the noblewoman he was supposed to be protecting. Together, they race to the capital to unmask the traitors and restore the republic’s defences. Far across the Misery a vast army is on the move, as the Empire prepares to call the republic’s bluff.

Out now from Gollancz, you can get your copy of Blackwing by clicking HERE! 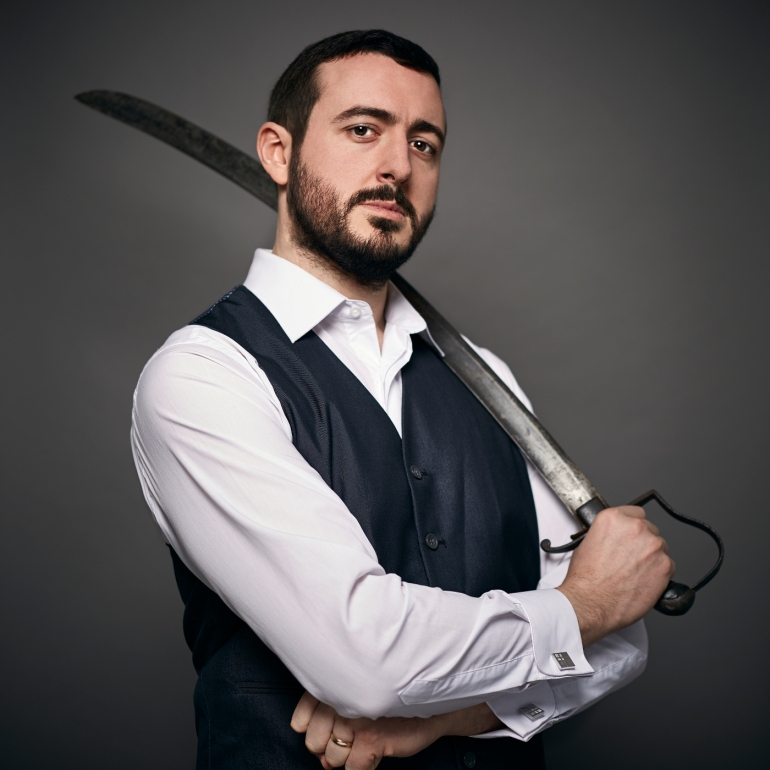 Ed McDonald has spent many years dancing between different professions, cities and countries, but the only thing any of them share in common is that they have allowed him enough free time to write. He currently lives with his wife in London, a city that provides him with constant inspiration, where he works as a university lecturer. When he’s not grading essays or wrangling with misbehaving plot lines he can usually be found fencing with longswords, rapiers and pollaxes.

Ed’s debut novel Blackwing is the first part of The Raven’s Mark trilogy. Blackwing will be published on July 20th 2017 by Gollancz in the UK, and October 2017 by Ace in the United States. German, Spanish, French, Hungarian and Russian translations will be available from 2018.

Loved Blackwing! I’m new to this whole fantasy book reading thing, but I’m starting to figure out what I enjoy and Blackwing is just amazing! It has epic world-building, a damn fine main character, a band of supporting characters that is both motley and brilliant, and an absolutely insane plot!

The concept of the Blackwings is one of my favourite things about the book. I mean, what’s not to like about ravens ripping themselves out of your arms to deliver you a (usually bad) message?! I jest, but I do like the gruesomeness of Ed McDonald’s mind. Its dark, and messy and the exact kind of thing I enjoy reading about.

Special mention to The Misery, because to be air, it is bleak as f***. Riddled with dangers, seen and unseen, and just a generally rubbish place to find yourself. Not least when a war is coming. I really enjoyed the magic system in this one. How it was made, maintained and described was super cool as imagining the horrors made the book even more immersive and dark.

So yeah, Blackwing… superb! I cannot wait for the next one!