I’ll be sharing Ellen’s review for Hide and Seek just a little further down. First though, here’s the all important bookish information!

The sun is out. Your little boy is smiling. The next time you look… he’s gone.

Lana Cross would do anything to protect her perfect family but on a trip to an adventure park, they slip out of her sight. When she finds her husband, he’s out cold on the forest floor. Then the truth sinks in: Cooper, her four-year-old son, is missing.

No one stopped the man carrying the sleeping boy. The park cameras don’t show where he went. Then Lana receives an anonymous message, telling her to visit a local school with a horrifying history…

This is no random attack. Whoever took Cooper is playing a twisted game, and if Lana wants to find him, she must participate.

How could there be a link between the school and her missing son? And can Lana find her little boy before it’s too late? 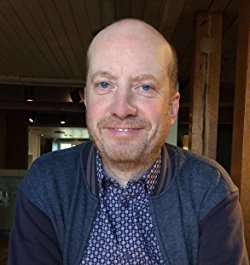 Richard Parker is an ex TV script writer, script editor and producer who now writes dark, stand alone thrillers. His first novel, Stop Me, was nominated for a Dagger Award.  The movie rights to his second, Scare Me, have been bought by Hollywood studio Relativity Media with screenplay completed by Wentworth ‘PRISON BREAK’ Miller and his third, Stalk Me, rode high in the US and UK Amazon charts.

It has been a few days since I finished reading Hide and Seek and I still keep thinking about it; playing on a parent’s worst fears of anything happening to your child and introducing one of the most sinister characters I have read this year in the form of Mr Whisper. Seriously, I had the heebie jeebies from the opening chapter and the first failed abduction attempt of Cooper and from then was taken on a heart pounding journey right up until the last page!!

Understandably Lana is a little paranoid after this life changing event and lives in fear every day that Mr Whisper will return to take Cooper as he promised but surely that couldn’t happen right?!

Wrong!!  Lana and her husband Todd are plunged back into a real life nightmare when their son Cooper is abducted while they are on a family trip. Todd is injured and has dangerous secrets of his own to deal with and Lana is embroiled in a dangerous game of cat and mouse to try and find Cooper before it’s too late. Hide and Seek was one of those books that I couldn’t put down and raced to finish (much to the detriment of my poor pounding heart!). My feelings towards Lana and Todd were mixed; they both seemed guilty of putting Cooper at risk but I couldn’t knock Lana’s bravery in her mission to solve the puzzles being drip fed to her from the abductor and find her son.

A gripping thriller that will keep you guessing until the very end!!