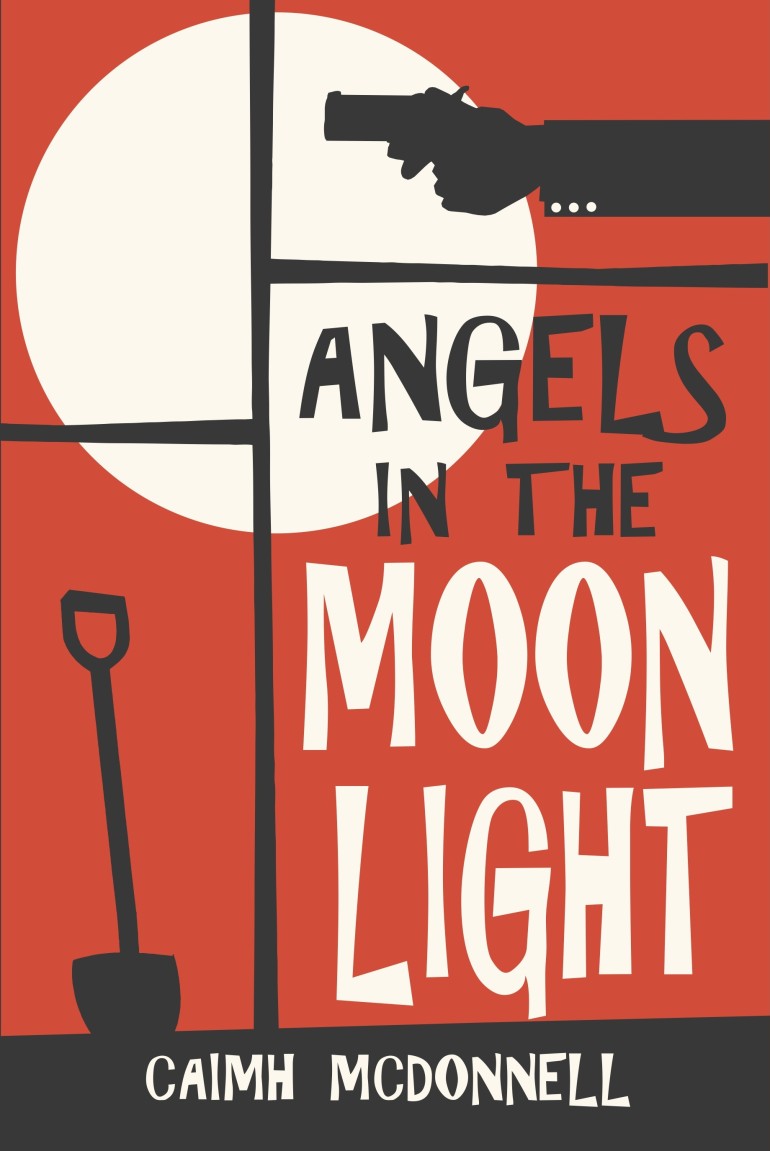 Today is Ellen’s stop on the blog tour and I’ll be sharing her review a little further down. Also, I have a HILARIOUS guest post from Caimh!

For Detective Bunny McGarry, life is complicated, and it is about to get more so.

It’s 1999 and his hard won reputation amongst Dublin’s criminal fraternity, for being a massive pain in the backside, is unfortunately shared by his bosses. His partner has a career-threatening gambling problem and, oh yeah, Bunny’s finally been given a crack at the big time. He’s set the task of bringing down the most skilled and ruthless armed robbery gang in Irish history. So the last thing he needs in his life is yet another complication.

Her name is Simone. She is smart, funny, talented and, well, complicated. When her shocking past turns up to threaten her and Bunny’s chance at a future, things get very complicated indeed. If the choice is upholding the law or protecting those he loves, which way will the big fella turn?

Angels in the Moonlight is a standalone prequel to Caimh McDonnell’s critically acclaimed Dublin Trilogy which melds fast-paced action with a distinctly Irish acerbic wit, and it is complicated.

Caimh McDonnell is an award-winning stand-up comedian, author and writer of televisual treats. Born in Limerick and raised in Dublin, he has taken the hop across the water and now calls Manchester his home.

He is a man who wears many hats. As well as being an author, he is an award-winning writer for TV, a stand-up comedian and ‘the voice’ of London Irish rugby club. His debut novel, A Man with One of Those Faces was released in 2016 and it is the first book of the Dublin Trilogy series. The follow-up, The Day That Never Come was published in 2017. Both books are fast-paced crime thrillers set in Caimh’s home town of Dublin and they are laced with distinctly Irish acerbic wit.

Caimh’s TV writing credits include The Sarah Millican Television Programme, A League of Their Own, Mock the Week and Have I Got News for You. He also works as a children’s TV writer and was BAFTA nominated for the animated series ‘Pet Squad’ which he created.

During his time on the British stand-up circuit, Caimh has firmly established himself as the white-haired Irishman whose name nobody can pronounce. He has brought the funny worldwide, doing stand-up tours of the Far East, the Middle East and Near East (Norwich).

My name is Ellen and I love Bunny McGarry. There I said it. There should probably be some kind of support group for #Bunnylovers – hang on that doesn’t quite sound right but you know what I mean! Having been firmly ensconced into my heart after reading A Man With One of Those Faces and The Day That Never Comes it was a delight to get to know young Bunny and his particular brand of policing.
As always with Caimh’s book there is the perfect mix of crime and humour and I still can’t get over how successful this is. One minute we have a hard as nails local thug commandeering armed robberies and the next a flying sheep. It never gets ridiculous, it works. Every. Single.Time. So yeah; it’s a gritty crime story but it has a hilarious undercurrent and a heart of gold. Did I mention I love Bunny McGarry?

In this prequel we are introduced to a love interest for Bunny (erm….back off love) in the Southern beauty shape of Simone, a gorgeous jazz singer who is very secretive about her reasons for being in Dublin. Reasons which can only spell trouble for Bunny. Simone lives with a bunch of nuns (The Sisters of the Saint) who are in a league of their own. Including such delights as Sister Bernadette’s homemade mace, Sister Assumpta’s stripping antics and sleepy Sister Margaret. The nuns are part of the colourful cast of characters that we always find in this series. I have had a favourite one in every book and for this one I pick Magpie Mary, a tiara wearing homeless old lady. It was great to get a sneaky peek of Paul Mulchrone too and the hurling scenes had me rolling with laughter.

So you must have guessed by now that I REALLY enjoyed this book, it gets #allthestars and once again Mr McDonnell has left me gagging for more!

A Man With One Of Those Faces by Caimh McDonnell

The Day That Never Comes by Caimh McDonell Review

I read an article recently where an author went through a list of morning routines she had in order to inspire her creativity; I’ll be honest, I was dead jealous. I’m really not a morning person at the best of times and frankly, I invariably don’t end up doing much writing until about midday, which means I’m wasting quite a bit of time faffing about. As a ‘creative professional’ you’re always trying to find a way of getting into that blessed ‘flow’ state as quickly as possible, and then staying there for as long as possible. You know the one I mean, everyone has experienced it regardless of what they do – where you’re brimful of ideas and any problems you encounter are laughably easy to fix. It feels like your brain is firing on all cylinders. You’re like Bradley Cooper in that film Limitless; you are to all intents and purposes a superhero/God/Stephen Fry.

I have tried meditation but  I honestly just sit there going ‘so, this is meditation?’.  A morning walk, caffeine, listening to the right music, reading a few motivational quotes – I’ve tried them all. I’ve had some glimmers of success but nothing consistent. In fact, do you know the only activity I’ve found that gets my mind immediately in the zone? My version of the little blue pill that makes Bradley Cooper into a tornado of genius? Telephone rope-a-dope!

I shall explain; my wife and I have a landline in our flat because, as we all know, you have to have one to get broadband. The only use the landline gets is when we use it to ring a mobile that has gone into hiding. Nobody has ever been given our landline number and we’ve had ourselves removed from all registers to stop us getting sales calls. Yet, we still get calls most days  – we just get those calls. You know the ones – scammers who have got your number from somewhere and who are looking for easily scared and vulnerable people to take advantage of. Most people see these as a nuisance, I don’t. It is very, very rare in this world to have someone on the other end of the phone who you know is a nasty piece of work, an utter waste of space. My advice is, don’t get mad, get creative!

I literally skip to the phone now when it rings, my head instantly a maelstrom of ideas. The purpose of the subsequent conversation is seeing how much time of the scammer’s time I can waste and how creative I can be. I have answered as Jorgen the Swedish ski instructor, Tourettes Terry, Barry on a rollercoaster (I pretended to be on a rollercoaster), Confused Colin who kept opening an actual window as opposed to one on the PC, and my personal favourite, Narcoleptic Niall (I explained the situation to the very understanding scammer who then shouted ‘wake up Niall’ seven times in the conversation when I kept falling asleep).

Normally the scammer is a ‘BT Engineer’ or ‘from X bank’. Once though, I did get a phone call from ‘the government’ informing me that I had been given a grant of ten thousand pounds for reasons that never became clear. In case you’re wondering, I explained how I was going to use the money on fake boobs – for me (three pairs), the cat, the dog and on the front of the house. The beauty of this is that, although the person on the other end thinks you’re insane, that was also one of the options they were hoping for, someone crazy enough to give a stranger bank details or download a dodgy bit of software. I’m really hoping ‘the government’ rings back as I have a lot more ideas on what I can spend the money on. I want to launch the first manned privately funded space mission to the sun!

There are also numerous musical options – for example, I tried to see how long I could go for only speaking in U2 lyrics. That is dead tricky by the way, he hung when I told him I couldn’t live with or without him – men really are bastards! I’ve also used it as an opportunity to stretch my own musical wings though, I do enjoy putting the scammer ‘on hold’ and then providing the hold music myself. I’ve done show tunes, freeform jazz, a brief and regrettable foray into gangster rap  – the point there is that there are no wrong choices in telephonic improv.

So, when they hang up, as they always do – I’m left creatively inspired and feeling morally fulfilled as I’ve made my day start with a bang and I’ve hopefully made a terrible human being more fully aware of the contempt they are held in by the rest of society.

Huge thanks to Elaine Ofori and Caimh McDonnell for having Ellen on the tour! 🙂

Make sure to check out these great blogs too: 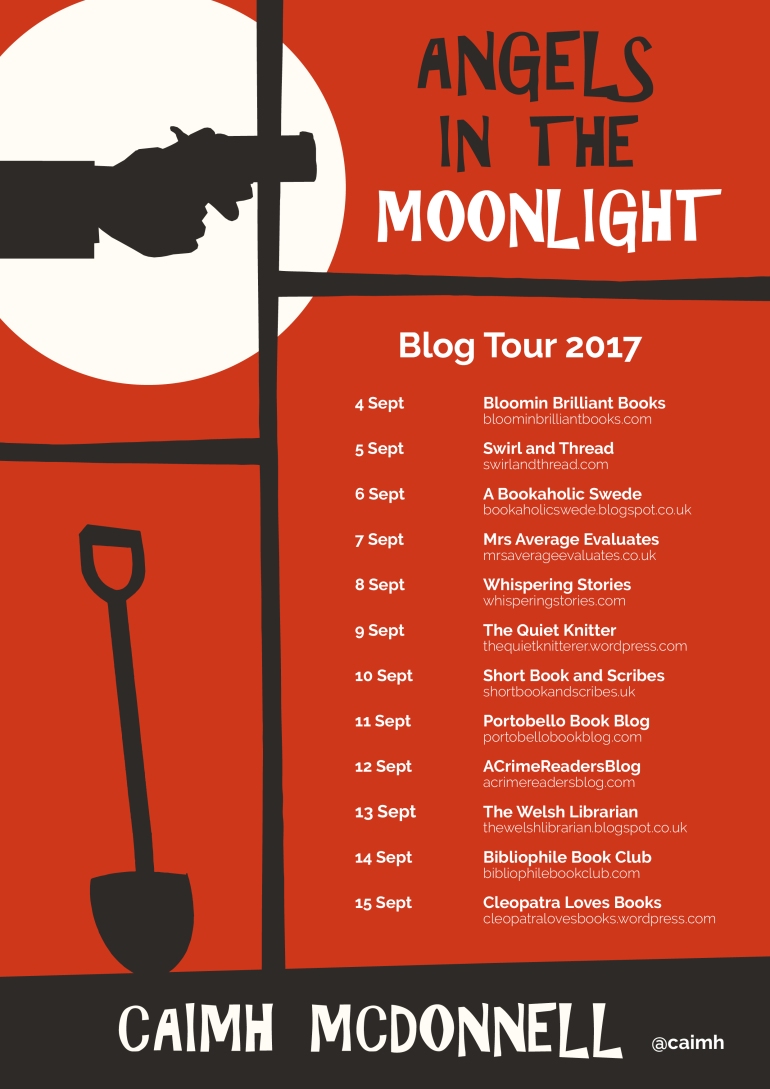