To celebrate Briefly Maiden’s release on Thursday, the second Ali Dalglish book, by Jacqueline Chadwick, I’m re-sharing my Q&A today, and tomorrow I’ll be resharing my review for her debut, In The Still!

Jacqueline Chadwick is probably best known for her work in British soap operas.

Jackie appeared in ITV soap opera Emmerdale, as Tina Dingle from 1994–1996. For this role she was nominated for Most Popular Actress at the 1996 National Television Awards.

In 2002 she relocated to Canada with her husband and family.

In The Still is her first novel. 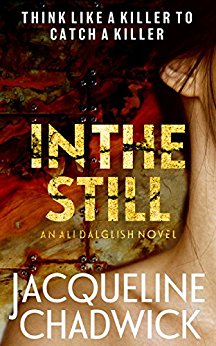 When Ali Dalglish immigrated to Canada she left behind her career as Britain’s most in-demand forensic pathologist & criminal psychologist.

Now, eight years later, Ali feels alone, and bored, and full of resentment. Suffocated and frustrated by her circumstances and in an increasingly love-starved marriage, Ali finds herself embroiled in a murder case that forces her to call upon her dormant investigative skills.

As she’s pulled deeper into the case of ‘The Alder Beach Girl’ and into the mind of a true psychopath, Ali is forced to confront her fears and to finally embrace her own history of mental illness.

In an increasingly febrile atmosphere Ali must fight hard to protect those she loves from the wrath of a determined and vicious predator and to ultimately allow the woman she once was to breathe again.

You can get your copy bu clicking the link below:

In The Still (Ali Dalglish Book 1) by Jacqueline Chadwick

At the risk of boring you to death: I am forty-two, Scottish, I have two children and too many dogs. I have a fabulous husband who is a firefighter. I grew up in Birmingham where I became an actress at the age of 11 and continued in that field until I was 26. I left acting to focus on motherhood and to homeschool my kids. I moved to Canada in 2009 were I work as a writer and miss the U.K. every day.

I have always loved writing. During my years as an actress, writing was my ‘dirty little secret’ and I would sneak off to my dressing room and write plays and TV scripts and screenplays. Nowadays I like to write novels, especially ones that are just a little bit twisted.

The inspiration for my first novel, ‘In The Still’, was a combination of  two things: a secluded nature trail near my house and my husband’s job as a first responder. I wanted to know, if a murder victim was discovered in the sleepy municipality where I now live, how would it be handled? Who would be first on scene? Would they bring in specialists? Then, once I started to describe the setting, it became clear to me that a killer could operate undetected for a long time, perhaps forever, in such a place as long as he chose his victims carefully and didn’t get clumsy.

I am fascinated by the dark side of human nature. I love to explore the notion of evil. I get excited writing things that are grim and sometimes uncomfortable. I’m happy with certain chapters only when I have to take a break after writing to have a drink of water and let my nausea subside. My central character is a brilliant woman called Ali Dalglish but what I especially like about her is that she isn’t perfect, she is flawed and about as far away from sorted as you can get.

Since ‘In The Still’ is my debut, I am green to the industry and to social media. Although I’ve become totally addicted, I am a Twitter newbie and so you’ll have to ask me that one in the future.

Writing every day. It is my idea of heaven on earth. I love every moment of it from the first chapter to the very last.

Well, as I said before, I’m learning as I go but I have noticed that, once your work is out there, you have frequent moments of self-doubt and sheer panic. However, thus far it’s been nothing a glass of wine can’t fix.

‘Briefly Maiden’ and ‘Silent Sisters’ (books two and three in the Ali Dalglish series) are being published by Fahrenheit Press later this year and I’m currently working on a fourth that’s set in Britain because I’m just so damn homesick.

I read every day. At the moment I’m working my way through the works of the Fahrenheit Press family and I’m thoroughly enjoying them all. Crime fiction is my favourite genre and always has been since I was little but I like to read a mix of styles and genres, both modern and classic.

There are many books I love but one in particular stands out as my favourite: ‘Hannibal’ by Thomas Harris. I remember reading it on the train and my face getting hot as Harris introduces Mason Verger, it was the first time I had to shut a book just to steel myself for more.

I have always homeschooled my kids. My daughter is twenty and so she’s all done but I still work with my son, Jamie. There’s always crap to do around the house (especially with four dogs) but nowadays I can slip off to my desk, dive into a new chapter and leave it for tomorrow.

Oil painting and furniture restoration although, since Ali Dalglish took up residence in my skull, I haven’t done either for a while.

My husband and I have always taken the kids to Disney but right now, given the chance, I’d go to Britain – I’m dying for a proper fish supper, some tattie scones and as much Irn Bru as I can take.

I love beer but it’s too fattening (I’m five foot and so every pound just takes me closer to that barrel-shape I’m genetically destined for) so I stick to vodka and cranberry and the odd glass (bottle) of red.

Whenever I don’t write, even if for just a few days, I go more than a little bit crazy. It’s something I am compelled to do. I bloody love it!

Huge thanks to Jackie for answering my questions! 🙂

Check back tomorrow for my refresher of In The Still…

One thought on “Q&A with Jacqueline Chadwick @jackiechaddy @fahrenheitpress”