To be in with a chance to win, all you have to do is retweet the pinned tweet on my Twitter page @BibliophileBC. It’s that simple! 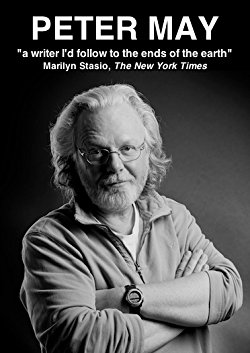 Peter May is the multi award-winning author of:

May had a successful career as a television writer, creator, and producer.

One of Scotland’s most prolific television dramatists, he garnered more than 1000 credits in 15 years as scriptwriter and script editor on prime-time British television drama. He is the creator of three major television drama series and presided over two of the highest-rated serials in his homeland before quitting television to concentrate on his first love, writing novels.

Born and raised in Scotland he lives in France.

His breakthrough as a best-selling author came with The Lewis Trilogy. After being turned down by all the major UK publishers, the first of the The Lewis Trilogy – The Blackhouse – was published in France as L’Ile des Chasseurs d’Oiseaux where it was hailed as “a masterpiece” by the French national newspaper L’Humanité. His novels have a large following in France. The trilogy has won several French literature awards, including one of the world’s largest adjudicated readers awards, the Prix Cezam.

The Blackhouse was published in English by the award-winning Quercus (a relatively young publishing house which did not exist when the book was first presented to British publishers). It went on to become an international best seller, and was shortlisted for both Barry Award and Macavity Award when it was published in the USA.

The Blackhouse won the US Barry Award for Best Mystery Novel at Bouchercon in Albany NY, in 2013.

Niamh and Ruairidh Macfarlane co-own the Hebridean company Ranish Tweed. On a business trip to Paris to promote their luxury brand, Niamh learns of Ruairidh’s affair, and then looks on as he and his lover are killed by a car bomb. She returns home to Lewis, bereft.

I’LL ALWAYS BE THERE FOR YOU

Niamh begins to look back on her life with Ruairidh, desperate to identify anyone who may have held a grudge against him. The French police, meanwhile, have ruled out terrorism, and ruled in murder – and sent Detective Sylvie Braque to shadow their prime suspect: Niamh.

I’LL KEEP YOU SAFE, NO MATTER WHAT

As one woman works back through her memories, and the other moves forward with her investigation, the two draw ever closer to a deadly enemy with their own, murderous, designs.

I’ll Keep You Safe by Peter May

I’ll Keep You Safe is an absolutely beautiful and epic story told from various POV’s and between the present day of the incident and the past history of Niamh and Ruairidh’s life/love story and their creation of the Ranish tweed design company. I really liked Niamh and felt for her as everything she thought she knew about her husband was torn apart at the seams. As the story progresses it becomes apparent that they were soulmates yet Ruairidh appears to have thrown this relationship to one side and become the victim of a car bombing  with his mistress as a result.

We follow this investigation from the streets of Paris to the barren beauty of the Isle of Lewis in the Scottish Hebrides. The descriptions of this landscape and its traditions were truly enchanting and really captured my imagination. That Niamh is left alone and heart-broken in this haunting place full of memories really tugged at my heart strings. As more and more was revealed about her past, I wondered how Niamh would ever be able to carry on especially as she is considered as a suspect.

There is a rich cast of characters in this story; a fashion designer with a grudge, Niamh’s family who have never been happy with the couple’s marriage and childhood friends who might hold a clue to who the murderer may be. Two of my favourite characters were Detective Sylvie Braque from Paris and Detective Sergeant George Gunn of the Isle of Lewis. It seems that they are from different planets of policing but they come together to try and solve the case.

I’ll Keep You Safe is more than a thriller; it’s a story of love and loss and of adapting to life altering circumstances. I have learnt about the creation of tweed and island traditions that people hold dear to this day, something I would never expect from a thriller. This is the first book by Peter May that I have read but it definitely won’t be the last!

Check out the blog tour: