So I’m back with another Recent Reads Rapid Reviews post. I’ve been crap at reviewing lately so I’m about twenty-odd reviews behind. It made sense to bring back this feature as it’s the only way I can get some mini-reviews done for what I’ve been reading lately.

If you follow me on Twitter or Facebook, you’ll know that my lovely uncle passed away recently after a brief illness, so the blog and reviewing has been the furthest thing from my mind. I’ve been reading as a way to keep my mind off the sadness and grief, so I have quite a few of these to do. Plus some from late last year, so I’ll be posting a few Recent Reads, Rapid Reviews posts in the coming week or two, so bear with me 🙂

Seven years ago the Atargatis set off on a voyage to the Mariana Trench to film a mockumentary, bringing to life ancient sea creatures of legend.

Now, a new crew has been assembled to investigate. And they’ll discover that whatever is down there is definitely no joke . . .

I really enjoyed Into The Drowning Deep. Its not something I would have picked up myself (Thanks to Nazia @ Orbit) but it was a fun read. If cannibalistic mermaids is your thing, then you’ll love this one. I found myself glued to this book, possibly in a car-crash sense of the word in that you know no good can come of being deep underwater with these creatures and its only a matter of time before people start disappearing! Escapism abound in this one, it definitely kept me reading! 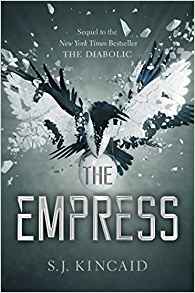 It’s a new day in the Empire. Tyrus has ascended to the throne with Nemesis by his side and now they can find a new way forward – one where they don’t have to hide or scheme or kill.

But having power isn’t the same thing as keeping it, and change isn’t always welcome. The ruling class has held control over planets and systems for centuries and they are not going to give up their power willingly, especially not to a teenage Emperor and Nemesis, who they consider nothing more than a creature and certainly not worthy of being Empress.

Nemesis knows she will protect Tyrus at any cost; he is the love of her life and they are partners in this new beginning. But she also knows she can’t protect him by being the killing machine she once was. Instead she will have to prove the humanity that she’s found inside herself to the whole Empire – or she and Tyrus may lose more than just the throne… they might lose their lives.

*Read The Diabolic before you read The Empress!

This is a great follow up to the events of The Diabolic. I had been eager to read this one and I wasn’t disappointed. Full of action, some seriously shady characters, and more twists that I was expecting, it kept me reading compulsively. It is YA, but with the corruption and politics, it could easily be general fantasy. Highly readable, but just make sure you read book 1 first so you’re not lost!

Late one night a man walks into the luxurious home of disgraced banker Harry McNamara and his wife Julie. The man launches an unspeakably brutal attack on Harry as a horror-struck Julie watches, frozen by fear. It looks like Harry’s many sins – corruption, greed, betrayal – have finally caught up with him.

An hour later the intruder, JP Carney, hands himself in, confessing to the assault. The police have a victim, a suspect in custody and an eye-witness account, but Julie remains troubled.

Has Carney’s surrender really been driven by a guilty conscience or is this confession the first calculated move in a deadly game?

I read The Confession fairly quickly. Its an Irish psychological thriller with a highly divisive set of characters. I found myself compelled to read the book at every opportunity, and its definitely an interesting read. It covers some of the financial history that we have lived through as well which you’ll appreciate (maybe wrong choice of word, but you know what I mean!) if you’re Irish like me!

The trainee detective assigned to the case isn’t so sure.

McAvoy thinks someone was being held at the derelict building where they just found a body pinned to the wall…and that all the signs point to it being a little girl.

But why would anyone not report a kidnapping?

And how far would someone go to get revenge?

The case will test McAvoy to breaking point – as the crimes of the present lead him to a final violent confrontation with an enemy from his own past.

My first meeting with DS McAvoy and it will definitely not be my last. I raced through this one, eager to see what was going to happen and where the author would take us. I wasn’t prepared for just how invested I would get in the characters fates. Excellent plot, great characters, what’s not to love! I will definitely be reading the previous books in the series, as well as recommending David Mark to anyone who will listen!

Maybe it was a grandparent, or a teacher or a colleague. Someone older, patient and wise, who understood you when you were young and searching, and gave you sound advice to help you make your way through it. For Mitch Albom, that person was Morrie Schwartz, his college professor from nearly twenty years ago.

Maybe, like Mitch, you lost track of this mentor as you made your way, and the insights faded. Wouldn’t you like to see that person again, ask the bigger questions that still haunt you? Mitch Albom had that second chance. He rediscovered Morrie in the last months of the older man’s life. Knowing he was dying of ALS – or motor neurone disease – Mitch visited Morrie in his study every Tuesday, just as they used to back in college. Their rekindled relationship turned into one final ‘class’: lessons in how to live.

This was a spur of the moment ‘I want to read a book from my personal TBR’ decision, and Morrie has been on there for long enough. I find it hard to read books that are like this, and I’m pretty sure if I had read it in the past couple of weeks I would have been an emotional wreck, but not this time. Yes its a sad story, knowing the ending is inevitable, but it didn’t really do much for me emotionally. It was a bittersweet book, short but with plenty of little life lessons. It’s only the second Mitch Albom book I’ve read, but if I had to choose, The Five People You Meet in Heaven was more resonant. Still though, I liked reading about Morrie!

Ok, I think I’ll stop there, because I still have another 8 books to go and I do’t want to overload the post, haha!

Hopefully there is something in here you might read! 🙂

Books read in May 2020 📚
Coffee and a well-thumbed copy of Deal Breaker by @harlancoben #currentlyreading
OBSESSED! Some of my belated birthday presents that my husband ordered from @paperpressireland arrived today and I’m in love 😍🖤
Thanks @fahrenheitpress 💀🖤 #Fahrenzine #StrongerTogether
The lovely @goldsborobooks are running a competition where you post a #goldsborobooksshelfie and you could be in with a chance of winning a £50 voucher so here’s my contribution. And if you look closely you can spot some Goldsboro editions on the TBR 📚
Repurposed my floral crown to use as a backdrop on my tray. NGL, I like it 😆 These four are my last picks from my May TBR 📚