Something a bit different today! I had the pleasure of asking Lawrence Davis a few questions recently and I’ll be sharing that with you in a bit. First though, the all-important bookish info!

Lawrence Davis is a decorated U. S. Army Infantryman who served three combat tours overseas, including in Iraq. His first book, Blunt Force Magic, was written in part to help navigate the struggles associated with Post Traumatic Stress Disorder. He’s a shooting instructor and a dog rescue advocate who lives in Florida with his four rescue pitbulls and extremely patient girlfriend. 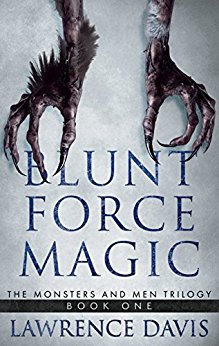 Janzen Robinson is a man torn between two worlds. Five years removed from a life as an apprentice to a group of do-gooding heroes who championed the fight against supernatural evils, the once-promising student is now a package courier going through the daily grind, passing time at a hole-in-the-wall bar and living in a tiny, run-down apartment on the south side of Cleveland, Ohio. Then fate (or a case of bad timing) brings him face to face with a door that’s got his old life written all over it.

From the ancient recesses of unyielding darkness known as the Abyss, a creature has been summoned: a Stalker, a predator whose real name is forbidden to be spoken aloud. It’s a bastardization of the natural order, a formidable blend of dark magic and primal tenacity. Its single-minded mission? Ending the life of a fiery, emerging young witch. Thrust into the role of protector, a role once reserved for those he’d lost years ago, the out-of-practice “Artificer” not only has to return to a life he’d left behind, but must relive that painful past while facing down the greatest threat to come to our world in a century.

Janzen will have to journey through the magical underbelly of the city and not only stay one step ahead of an unstoppable monster hellbent on destruction but try and figure out why it’s been brought to our world in the first place. Past wounds are reopened as Janzen looks to old friends, a quiet stranger, and his own questionable wits to see them all to the other side of this nightmare that may cost him his life and, quite possibly, the world itself.

My name is Lawrence Davis, I’m still pretty fresh into my thirties. Big time fan of science-fiction and Fantasy, also a comic fan. I’m an Army combat veteran, I served with the infantry. Pitbull advocate, I’ve rescued four and they’re my absolute babies. Pizza is a constant of my diet and the bane of all my attempts to lose weight. Generally I’m not good at the about me section so I hope this scattershot of facts help.

How did you start writing:

I actually started writing when I was in trouble, I got online and got into a role-playing community. I mean silly stuff too, writing out Dragon Ball Z and stuff about Zelda. It was this cool smorgasbord of all my favorite mediums of entertainment, just senselessly smashed together. I loved it, and that was the genesis of my writing. That was where I met my creative partner Karla as well as a bunch of other writers I remained friends with over the years.

Tolkien was kind of my muse; when I decided I wanted to write a book I read a bunch about how he did a lot of world building during the first World War while in the trenches… so I started carrying a notebook around in Iraq, penciling in random ideas and notes. Salvatore, Butcher, Frank Miller, Joseph Loeb — like a Jackson Pollock of all the last twenty years of gritty, action stuff. As I got older though, I went less from trying to make an echo of the anti-hero type I fell so in love with and started really getting into more character development stuff. Not in terms just of growth, but flaws, how those flaws enrich them as characters and make them relatable.

Ugh, as a writer I’ll love what I wrote until the ink dries. Honestly I think my style is a marriage of a gruff narrator and an aspiring poet, like a guy who’s not good but has an occasional pearl. My style is like my signature: easy to read, a little sloppy and full of character.

Oh, right now I would be an awful voice on that. This is my first novel, but I will say the community is amazing. I mean even this page, the proprietor hasn’t read the book but she’s supportive enough to allow me to contribute. I guess I would say it can’t hurt, and the reception from the community has been almost life-affirming.

Favorite thing about being an author:

People I know not only buying my book, which is such a humbling honor, but reading it. Reading it and liking it. That was such a thrill. I wrote this book as an homage to my best friend who died, and our entire adult life he wanted me to put a book out. It feels like it validates his belief in me, and that’s priceless.

It’s been dope to me, but I guess I’ve never questioned myself as a writer, I always did it for fun and being judged wasn’t a thing. Now it is, and that can suck.

Book 6-7 of the series, plus I’m writing an accompanying novella trilogy to the main story so maybe the second novella coming out?

Book 2 is almost done now, as well as the first novella. So hopefully those continue on as planned. Fingers crossed and all.

Are you a reader:

I actually don’t read a lot when writing. When coming up as a writer we took all the time from our favorite writers, and while I know that’s inevitable and has been happening since the dawn of written word, I try not to assimilate too much because of that habit. In my downtime I read a bunch. Simon R. Green, Neil Gaiman, as I stated before I stay up with comics and I love a series called Invincible by Image Comics.

I actively rescue and foster dogs, so that takes a lot of time up. I also own a security company, we hire mostly immigrants and veterans because my family background is both so we’re proud of that.

Dog rescue, shooting (I instruct a lot), trying to cultivate a program that introduces veterans to artistic mediums to help them along with new and productive ways of expression. Pizza. Love pizza.

Since I live in south Florida probably northern California. I love the mountains.

Chocolate milk? On the adult end, a vodka and soda water. Trying to count calories what with my pizza intake being what it is.

Because words are the most invigorating yet frustrating thing in all my life. I know my soul has some stuff to say, and discovering the way to not only articulate it but do it with eloquence is such an unending yet oddly rewarding challenge—or journey, rather. I couldn’t imagine anything else.

Many thanks to Lawrence for answering my questions for the blog! 🙂