Today I’m bringing you another laugh out loud guest post from Irish author Caimh McDonnell. While I haven’t read this series (YET, dear reader!!!), I know Ellen and plenty of other fab folk have, and raved about them all. Here’s all you need to know about Caimh and his books…

Caimh McDonnell is an award-winning stand-up comedian, author and writer of televisual treats. Born in Limerick and raised in Dublin, he has taken the hop across the water and now calls Manchester his home.

He is a man who wears many hats. As well as being an author, he is an award-winning writer for TV, a stand-up comedian and ‘the voice’ of London Irish rugby club. His debut novel, A Man with One of Those Faces, which was nominated for a CAP Award in 2017, is the first book of the Dublin Trilogy series. The sequel and prequel, The Day That Never Come and Angels in the Moonlight, were published in 2017. The books are fast-paced crime thrillers set in Caimh’s hometown of Dublin and they are laced with distinctly Irish acerbic wit.

Caimh’s TV writing credits include The Sarah Millican Television Programme,A League of Their Own, Mock the Week and Have I Got News for You. He also works as a children’s TV writer and was BAFTA nominated for the animated series ‘Pet Squad’ which he created.

During his time on the British stand-up circuit, Caimh has firmly established himself as the white-haired Irishman whose name nobody can pronounce. He has brought the funny worldwide, doing stand-up tours of the Far East, the Middle East and Near East (Norwich).

As I mentioned above, my super guest reviewer Ellen has read and reviewed the first three books, and you can check out her reviews by clicking the links below:

A Man With One Of Those Faces by Caimh McDonnell

The Day That Never Comes by Caimh McDonnell

Angels in the Moonlight by Caimh McDonnell

The last book in this series is Last Orders, and it is out now, published by McFori Ink. Here’s what you need to know about that one: 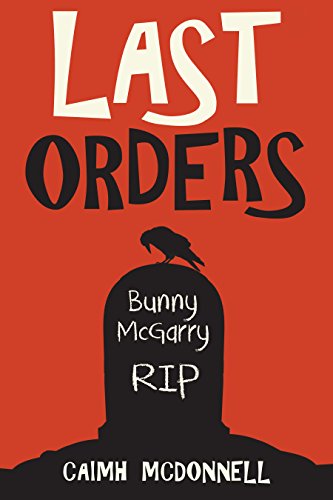 As a wise man once said, just because you’re done with the past, doesn’t mean the past is done with you.

Paul can’t let an incident from his past go. When he finds out a rival detective agency played a key role in it, he drags MCM Investigations into a blood feud that they can’t hope to win. Soon they’re faced with the prospect of the company going out of business and Brigit going out of her damn mind.

When long-buried bodies are discovered in the Wicklow Mountains, Bunny’s past starts closing in on him too. Who can he trust when he can’t even trust himself? When he finds himself with nowhere left to run and nobody he can turn to, will the big fella make the ultimate sacrifice to protect the ones he loves?

When all that’s left is the fall, the fall is everything.

And even the mighty fall.

Last Orders is the thrilling conclusion of the critically acclaimed Dublin Trilogy, which melds fast-paced action with a distinctly Irish acerbic wit. It’s best enjoyed having read the other books in the series, particularly the prequel Angels in the Moonlight.

Click the links below to order your copy now:

People often ask me ‘what’s the hardest thing about being a writer’?  To be clear, that isn’t the most common question I get asked, in fact those are;

2/ Are you going to buy that pie?  You can’t just stand there and ogle it.

3/ Seriously, that’s how you say your name?

4/ Have you seen the packet of biscuits that was just here?

5/ Are you absolutely sure that’s how you say your name?

But number 6 is that question about what’s the hardest thing about being a writer. Prepare to be shocked, but it’s the writing. I know, who could’ve seen that coming? The follow-up question is generally along the lines of ‘which bit of the writing?’

That’s a bit trickier. For me it’s not fight scenes – although my editor did give me a strict ‘one nut shot per novel’ rule, it’s not argument scenes – you should meet my family, and it’s not even love scenes – although to be fair, while there is reference to nookie in my books, I’m far too bashful-lapsed-Catholic to go into what-goes-where details, as I’d imagine is clear from my insistence in referring to sex as ‘nookie’.

No the hardest bit of the book to write isn’t actually even in the book, it is on the back cover. I cannot describe how utterly tortuous it is to write the blurb. It’s not supposed to be a summary, you’ve got to make it sound exciting, it has to capture the spirit of the book, you have to put a question in the reader’s mind that they need answered, you can’t use the word gobshite or certain retailers get upset – it’s an absolute minefield.

In fact, there’s an argument to be made that the worst person to write the blurb for a book is the person who actually wrote the book. You’re simply too close to it. It’s incredibly difficult to boil down what you think is good about it into a few pithy sentences. In all honesty, it’s a bit like trying to write a dating profile for your own partner. Actually, that’d be easier (woman with the patience of a saint seeks nice person for strictly no-nookie relationship who knows how to fix the light in the utility room. No Carls from run club need apply).

Just the thought of writing another blurb is far more intimidating than the idea of writing another 100k word novel. I do wonder if the difficult back-cover ballet is part of the reason for those annoying ‘This is a twisty thriller with a twist that you won’t see coming’ subtitles that seem to have become so popular. With no disrespect to any author who uses them, as clearly they must work, but I can’t be the only person who is turned off by them? I’m really tempted to put a book out with the subtitle ‘It’s got a beginning, a middle and an end, all of which happen where you’d expect but there’s a dog in it, that people really like.’ Or perhaps, ‘this is a novel, it’s got a plot and some characters, that’s what a novel is’ or who can forget, ‘the book everyone is talking about, the one that finally reveals once and for all where Wally is.’

My point ,dear reader, is that you must respect that we authors are tortured souls and we’re giving blood, sweat and tears all in the hope of entertaining you and of course ‘giving you a shockingly shocking twist that you won’t see coming’. If you take nothing else away from this, please do remember not to judge a book by its back cover and also, Carl from run club is a creep and I don’t trust him. I’m pretty sure he has a twist I do see coming.

As always, many thanks to Caimh for a funny and insightful guest post, and to the lovely Elaine at McFori Ink for having both myself and Ellen along for Bunny’s journey! 🙂

You guys can check out Ellen’s review on the blog soon too!