Today I’m thrilled to be taking part in the blog tour for Dark Waters by Mary-Jane Riley and I have a great post from Mary-Jane for you all further down. First though, the all-important bookish information!

Mary-Jane wrote her first story on her newly acquired blue Petite typewriter. She was eight. It was about a gang of children who had adventures on mysterious islands, but she soon realised Enid Blyton had cornered that particular market. So she wrote about the Wild West instead. When she grew up she had to earn a living, and became a BBC radio talk show presenter and journalist. She has covered many life-affirming stories, but also some of the darkest events of the past two decades. Mary-Jane has three grown-up children and lives in Suffolk with her husband and two golden retrievers. 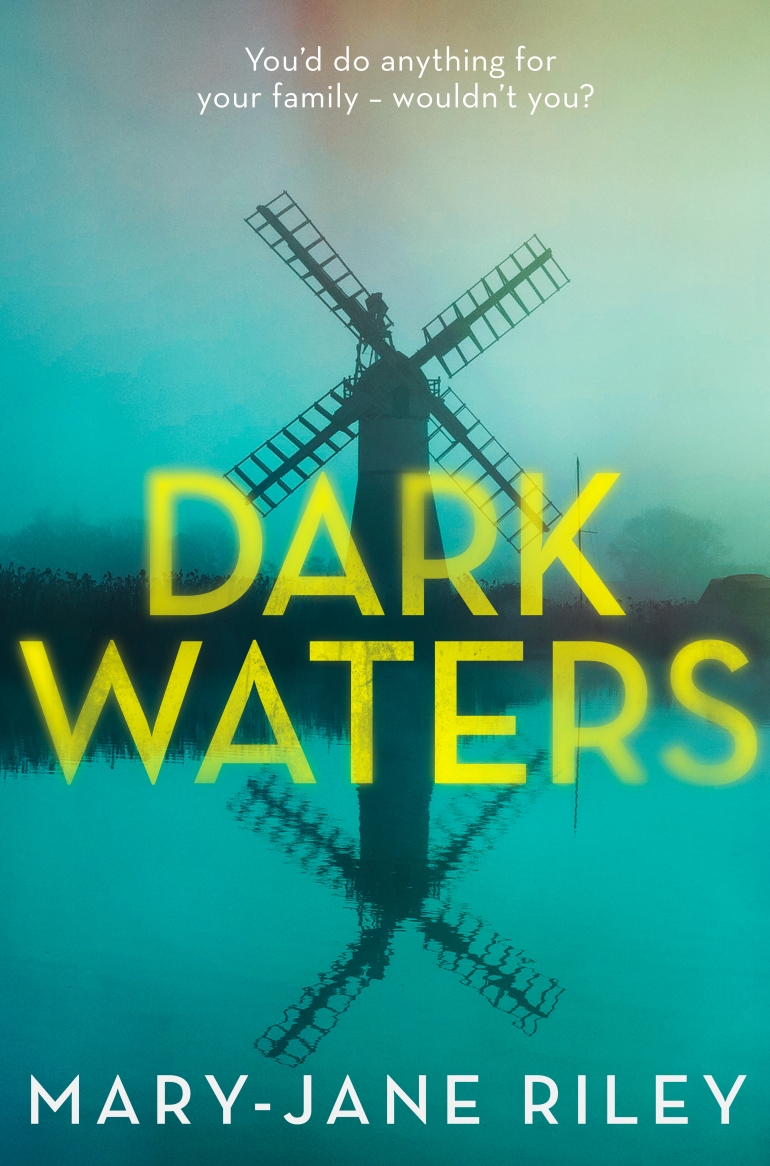 Secrets lie beneath the surface…

Two men, seemingly unconnected, are discovered dead in a holiday boat on the Norfolk Broads, having apparently committed suicide together.

Local journalist Alex Devlin, planning an article on the dangers of internet suicide forums, starts digging into their backgrounds.

But Alex’s investigation soon leads her to a much darker mystery – one that will hit closer to home than she could possibly have imagined, and place the lives of those she loves in terrible danger.

And now, over to Mary-Jane…

I can’t believe DARK WATERS is my third book and that it’s been three years since my agent called me to say that Killer Reads/Harper Collins had offered me a contract for my first book, THE BAD THINGS (now I’ve just got to think of a  way of squeezing the name of my second book, AFTER SHE FELL, into that sentence…). Writers often talk about the long and winding road to publication – the difficulties, the rejections, the blood, sweat and tears, and all that is true (except for those who strike it lucky first go … grrr), but do you know what? What? I hear you cry (I hope). I have learned even more over these last three years that I would like to share with you….

I wrote a book to send to agents. I wrote a prologue for said book, then I read a lot of stuff about how agents/publishers/uncle Tom Cobbley and all didn’t like prologues. I took the prologue out. The lovely person who was to become my agent asked for some revisions on the manuscript, then said ‘I think you need a prologue”. Reader, the prologue went back in.

An extreme example of not following my instinct came some time after the prologue incident. I wanted to get my book to my agent (a different one). My instinct was telling me, nay screaming at me, that I should read the whole thing again because the book wasn’t ready, wasn’t polished enough. I knew it in my gut. But what did I do? I sent it. It was returned with a very stiff admonishment and a long bruising phone call. I polished that book.

Don’t fret about other people’s deals/success/prizes.

Therein lies madness and the waste of several hours on social media and Amazon stalking the author and wondering why your book isn’t racing up the charts/in the Sunday Times/the subject of a bidding war (actually, a little boast here: my first book was the subject of a bidding war in Germany and it was very exciting!). You have to remember that people put their best faces on Facebook, and the best bits of their writing lives on Twitter. No-one talks about falling sales or publishing deals falling through in a public space… if they do, point me at ‘em! No, the best thing to do is put your head down and write your book and make it the very best you can. Ignore the success stories, they really are few and far between.

Turn off the WiFi

This advice is everywhere, but it does bear repeating. Social Media is a total time-suck. If I leave the wifi on, I find that I look at social media every two minutes when I’m writing a difficult scene or I don’t know where I’m going next. As if watching a BGT performer from Romania will help! Turn it off, keep it off. Of course, it’s a bit difficult when you need to do some research – I do mine as I go along – because it has to go back on. And then it’s just a little look at a couple of cute cat/dog/baby videos….

I can call myself an author

Yes, I can! Three books in and it starts to feel as though I’m not the biggest imposter in the world. Possibly.

Every. Step. Of. The. Way. (I usually hate seeing separate words punctuated by full stops, but it seems appropriate in this case). This was my agent’s very good advice. It’s a huge thing, writing a book. When you finish, celebrate. When you get an agent, celebrate. A publisher? Celebrate. Self-published? Celebrate. Finished editing? Celebrate. You get my drift?

Invaluable. I didn’t realise how many people would see my books, would read my books, and it has been so exciting. It is always fabulous to get reviews (as long as they are nice, thank you very much). It was lovely after the first book was published to get messages from people I had worked with saying how great it was to read my books (especially as I had plundered their names for characters) and friends I hadn’t seen for many years got in touch to say they were buying my books (whether they read them is another matter, but they have bought all my books so far).

And as for book bloggers, your enthusiasm and hard work is amazing and I can’t thank you enough. You treat each book you review/read/host on a tour as though it was the only book in the world at that moment. I don’t know where you get your time and energy from, but I thank you from the bottom of my heart.

Huge thanks to Mary-Jane for such an insightful post, and I wish you all the best with Dark Waters 🙂

Check out the other fab blogs taking part in the tour: