Today is my stop on the blog tour for Beneath The Whispers by Jim Ody, and I have a Q&A with the author for you all to check out! 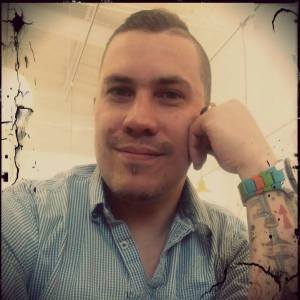 Jim was first published in an English School Textbook in 1987. He won a competition to draw a dog-walking machine. Having won an art competition the year before, he felt that at the age of eleven he had peaked and consequently retired from the world of art.

For 10 years Jim wrote for a number of websites reviewing and interviewing bands in his own unique way, as well as contributing dark poems and comedic features.

He writes dark psychological/thrillers that have endings that you won’t see coming, and favours stories packed with wit. He has written three novels released through Zombie Cupcake Press and has also contributed to several anthologies. Coming soon is his psychological/mystery ‘Beneath The Whispers’ released by Crazy Ink. He also has short stories appearing in the following anthologies ‘War Paint’, ‘Crazy Fools’, ‘AWOL A.I.’ and ‘The End?’.

Jim has a very strange sense of humour and is often considered a little odd.  When not writing he will be found playing the drums, watching football and eating chocolate. He lives with his long-suffering wife and three beautiful children in Swindon, Wiltshire. 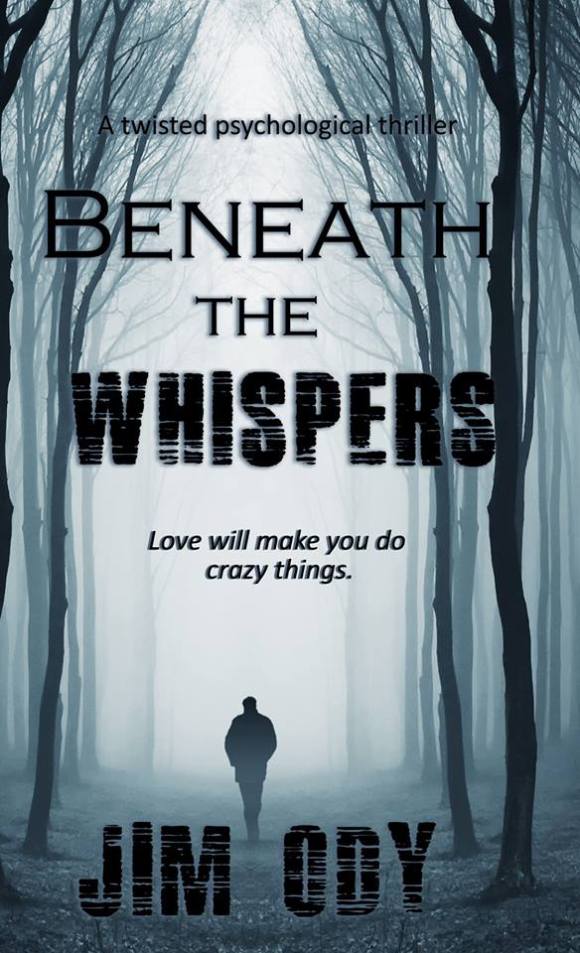 Genevieve Deboise is too good for Scott Dean. He’s always known that. It isn’t a shock to learn she is cheating on him.
What is a surprise is bumping into his childhood sweetheart in the woods where he’d planned to take solace in his heartbreak and bruised ego.

But running into Mary-Ann Jennings isn’t exactly the fairy tale it might seem.
Instead, his first love needs his help finding a USB stick that has fallen into the wrong hands. Now in the cellar of Genevieve’s new lover, Scotty must confront his feelings for both women in order to retrieve the missing USB stick.
On a quest to confront his past and locate Mary-Ann’s property, he journeys through the whispers that have always surrounded him.

Love will make you do crazy things.
But is it enough to get beneath the whispers?

Make sure to check out the blog tour: 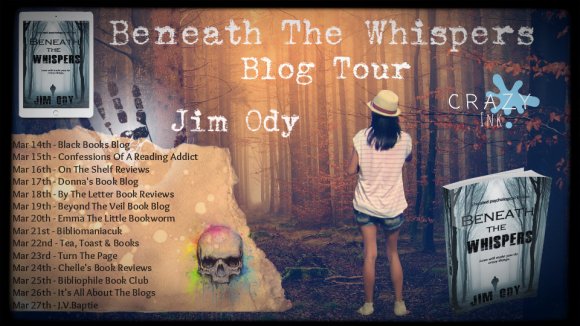 I am married and have three children who are a handful. I work as a Business Analyst in the day and write every night when the family has gone to bed. I’m an avid reader, love movies, music and football.

I’ve always wanted to be a writer. I wrote a lot of stories when I was younger, but it was when I was a regular writer for a music website that I began to gain recognition. I enjoyed making my reviews interesting and was quoted by a lot of bands over the ten years I was a reviewer and interviewer.

I gain my inspiration from the world around me. I watch movies and think of alternative endings or will suddenly get a small idea that will plant itself in the back of my mind and grow into an interesting idea that I want to expand on.

How would you describe your writing to anyone who hasn’t read your book?

My writing is multi-layered. It is very much character driven and I like to focus not only on what they are doing but looking back at their past at what might have driven them to do what they are doing. I love to break up the tension with witty dialogue and am known for unexpected endings.

Definitely. Social Media has been a huge help with increasing my profile and making people aware of my books. Whether it’s Blog Tours, Author Takeovers, or discussions within book groups I cannot stress enough the importance of connecting with potential readers. It also helps me to understand the market and see what successful authors are doing.

It has got to be getting positive feedback about my work. Those ideas that have grown, nurtured and blossomed into a novel, being enjoyed by readers is a wonderful feeling. I especially enjoy the feedback I’ve received of people enjoying my books so much that they’re discussed them at lengths with family members and friends. Then seeing them recommended in groups.

I think it’s the lack financial return verses the huge number of hours dedicated in writing, promoting and general marketing. If it was for the money, then I would get more for working a second job of an evening at minimum wage! However, being an author is so much more than that!

My ambition is to release a book a year for a large publisher, whilst still releasing another novel and novella for one of my current publishers. If this does not pan out then I will still have released at least a dozen more novels and built up a larger fanbase.

I have a lot going on! This year I will be releasing seven short-stories in seven separate anthologies. I’ve already released one novel, and one novella. I have a crime/comedy called ‘…Just South Of Heaven’ that is the first of a series I’m writing. This should be out by autumn. I have another three novels to start on and I hope one of those will be also released by the end of the year. Depending on all of these I have plans to co-write three novels with three separate authors. We need to match up our schedules and pencil in the plans for these.

Yes, I have always been a big reader. I am a reader first and a writer second. I always try to help promote other authors because I want great books to read too! I enjoy psychological/thrillers, mysteries, comedies and horror. I try to read a wide variety of books and often learn little things for each. I truly believe that reading more books makes you a better writer.

This changes frequently but now it’s Caroline Kepnes ‘You’. I really enjoy her style and have just finished and enjoyed the follow up ‘Hidden Bodies’. I love the brash dialogue and the deep observations along with an unexpected plot. I think I have a similar writing style, but Caroline’s is the superior completed article.

The two above along with Peter Benchley’s ‘Jaws’, and Joe R Lansdale ‘Freezer Burn’.

We do a lot as a family. Other than that, I play football twice a week and also play the drums. I have to be doing something as \I get bored easily.

I’ve been to Hawaii twice and really love it there. We’ve also enjoyed the times we’ve been to America. I’ve set a couple of short-stories in America and would love to go back.

Either Fish & Chips or Chinese

I wanted to be either a writer, a drummer or a footballer. I am too old to be a footballer now which was something I dedicated a lot of my younger years to. I never had friends into music so apart from a couple of gigs I did to help out a band this was never an option. Writing is something I’ve always done, and arguably something you get better with age at. I have received the best feedback for it too. It is something that you can be unique and creative at too.

Thanks @titanbooks for @joannaschaffhausen #AllTheBestLies 📚
Have you a favourite crime series? ••••• I’m a huge fan of crime books set in cold climates, so when I first heard about @ragnarjo back in 2015, I knew I had found something special. ••••• Fast forward five years, and the Dark Iceland series, published by the wonderful @OrendaBooks, is still one of my favourites. ••••• As if that wasn’t enough, Ragnar then brought his Hidden Iceland books out with @michaeljbooks, and once again, I was hooked! ••••• These books are the most books I own in multiple copies, and I’m not even sorry! I’ve been lucky enough to meet Ragnar and he’s signed loads of them for me which is lovely to have! ••••• #books #DarkIceland #HiddenIceland #RagnarJónasson #series #crime
Cheating on your TBR 📚 ••••• Do you set yourself a reading list for the month? Ordinarily, I don’t but there are some books I want to read sooner rather than later. ••••• HOWEVER, this evening I wanted something good. Something I know I would enjoy. Something in the crime genre. So I picked one of my favourite Orenda authors, Gunnar Staalesen. His most recent Varg Veum novel came out last year, and it’s been on my TBR for ages so I picked it up earlier. ••••• I’m a huge fan of Scandinavian crime and thrillers, and Staalesen is a master in the genre. Wolves at the Door looks like it will be exactly what I’m looking for. ••••• #OrendaBooks #GunnarStaalesen #VargVeum #books #bookblogger #reviewer
Could I BE any more organized?! 😂 ••••• How do you keep track of your reading? ••••• I use @goodreads obviously, but I also wrote down what I read month by month. And if that wasn’t enough, I write down all the books I read in the year on another list. ••••• This Friends notebook from @primark is one of my favourites, so naturally it’s where I wrote this all down. ••••• #books #bookblogger #reviewer #Friends #notebook
Adding #TheUnspokenName by @aklarkwood to the #currentlyreading pile 📚 Thanks to the lovely @jamieleenardone @torbooks for sending me this beauty 🖤 #books #amreading #bookreviewer #bookblogger #fantasy #TBR
Meet the bookstagrammer (if that’s even what I am 🤣) I’ve gained a few followers recently, so I figured I should maybe introduce myself a little. I’m Kate and I live in the west of Ireland. I’m married to a wonderful man, and we have two kids, Tom and Isabelle. I am obsessed with all things black and gothic. I love anything that looks spooky, but don’t ask me to read horror because I scare easily. Weird, I know. I’ve been a voracious reader since I was young. My room was full of books, and now that we have our own house, it’s turning into our own personal library. I used to read crime/thriller books exclusively but that changed last year as my mental health took a dive (there’s a post on the blog if you search for “With A Heavy Heart”). My favourite things to read now lean towards fantasy, science fiction and YA books. I’ll still read the odd thriller though, old habits die hard! To be honest, I’m open to most genres now because a change is as good as a rest. I love coffee, books, winged eyeliner, tattoos, HIM (the band) and the colour black 🖤 Did I leave anything out? Drop me a comment if there’s anything you want to know 😊 #bookstagram #bookblogger #bookreviewer #bookhoarder #goth

A blog for every chick lit lover all over the world