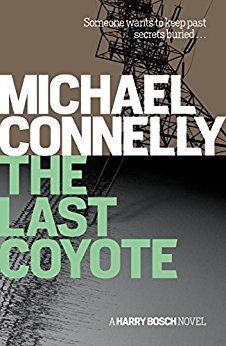 LAPD detective Harry Bosch is down on his luck – his house is condemned in the aftermath of the earthquake, his girlfriend has left him and he has been suspended for attacking his superior officer.

To occupy time, he examines the old case files covering a murder which took place on October 28, 1961. The victim was Marjorie Phillips Lowe – his mother . . .

The case forces Bosch to confront the demons of the past, and as he digs deeper into the case, he discovers a trail of cover-ups that lead to the high-ups in the Hollywood Hills…

Continuing my re-read of the fantastic Harry Bosch series with the fourth book, The Last Coyote. Following on from the events in The Concrete Blonde (which I read but haven’t reviewed), Harry is on leave from the LAPD, and is required to have mandatory therapy with the LAPD’s therapist. This causes Harry to confront his past, even though he is adamant that he doesn’t want to talk to her about anything!

The Last Coyote is a very personal book, with Harry deciding to re-open an old murder case, his own mother’s murder to be precise. This decision takes Harry on an emotional journey into the past, whilst making things very uncomfortable for him in the present.

It is clear to him when he begins to investigate, that somebody covered up some things about his mother’s murder, and he sets out on a journey to figure out what happened. And to find justice for his mother.

The Last Coyote is a gripping read, with vulnerable Harry dealing with his mother’s death, and his suspension. It is a tautly-written and often emotional journey into his past, but it is beautifully done. Harry is one of my favorite characters ever, and The Last Coyote is a prime example for seeing his flaws, and how he tries to deal with everything thrown at him.

The Harry Bosch series is well-written, intricately plotted and full of heart.