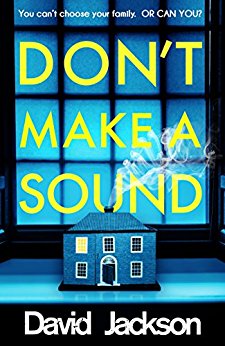 *Many thanks to the publishers for my review copy!

David Jackson is the author of a series of crime thrillers featuring New York Detective Callum Doyle. His debut novel, Pariah, was Highly Commended in the Crime Writers’ Association Debut Dagger Awards. When not writing fiction, David spends his time as a lecturer in a university science department. He also gives occasional workshops on creative writing. He lives on the Wirral peninsula with his wife and two daughters. David can be followed on Twitter, where he goes under the name @Author_Dave.

Join David Jackson’s Readers’ Club for all the latest news from David on his books, events and giveaways: http://www.bit.ly/DavidJacksonClub

Meet the Bensons. A pleasant enough couple. They keep themselves to themselves. They wash their car, mow their lawn and pass the time of day with their neighbours. And they have a beautiful little girl called Daisy.

There’s just one problem. Daisy doesn’t belong to the Bensons. They stole her.

And now they’ve decided that Daisy needs a little brother or sister.

D. S. Nathan Cody is about to face his darkest and most terrifying case yet . . .

Published TODAY by Bonnier Zaffre, you can order your copy by clicking the link below:

You guys! YOU GUYS!!! THIS BOOK!!!! It definitely nearly broke me. I have such a grá (love in Irish in case you want to know!) for Nathan Cody. I never want to stop reading when I pick up any of David’s Cody series, and Don’t Make A Sound was no exception.

But I had to put it down… to catch my breath, because THINGS HAPPEN! And I wasn’t prepared for how it made me feel!!! I picked the book up again after a few deep breaths, but I was super tense until I turned those last pages.

What a bloody thrill ride!!!

There is no doubt that David Jackson is an awesome writer, but he is also a master manipulator after this one (Love you really, Dave!) because it really messed with my head, heart and emotions. I am NOT complaining though, because this knack that Dave has means that his books will keep me gripped from start to finish.

Don’t Make A Sound, for me, is the best book in the series so far.  Without a shadow of a doubt. The plot is pitch perfect. The atmosphere is dark and nervy. The characters are so well-drawn (goodies and baddies) that the reader becomes immersed almost immediately and that denouement, perfection.

I can’t praise Dave or his books highly enough. Firmly on my favourites list for life, this series just keeps getting better and better.

Raw, dark and with an emotional gut-punch, Don’t Make A Sound is one thriller you DO NOT want to miss.

A Tapping at my Door by David Jackson

Hope To Die by David Jackson

One thought on “Don’t Make A Sound by David Jackson”