Today Ellen is taking part in the blog tour for No One Will Hear by Joel Hames, and I’ll be sharing her review a little further down! 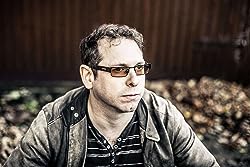 Joel Hames lives in rural Lancashire, England, with his wife and two daughters, where he works hard at looking serious and pretending to be a proper novelist.
After a varied career in London which involved City law firms, a picture frame warehouse, an investment bank and a number of market stalls (he has been known to cry out “Belgian chocolates going cheap over ‘ere” in his sleep), Joel relocated from the Big Smoke to be his own boss. As a result, he now writes what he wants, when he wants to (which by coincidence is when the rest of the family choose to let him).
Joel’s first novel, Bankers Town, was published in 2014, and The Art of Staying Dead followed in 2015. The novellas Brexecution (written and published in the space of ten days following the UK’s Brexit referendum, with half of the profits going to charity) and Victims were published in 2016 and 2017 respectively.

Joel’s website can be found at http://www.joelhamesauthor.com, where you can find out more about the writer and the books, and sign up to his email newsletter. If you want to know what Joel has planned for the future, what he thinks right now, or just stalk him a little, you can find him on Facebook at facebook.com/joelhamesauthor or Twitter at @joel_hames. Joel has never seen the word “Joel” appear as frequently as it does right here, and wholeheartedly approves.

Four murders
Four messages
One chance to catch a killer.

Renowned human rights lawyer Elizabeth Maurier lies dead, her body mutilated, her killer unknown. For DI Olivia Martins and her team, it’s a mystery. For the victim’s daughter Lizzy, a poet and academic with a shaky grasp on reality, it’s a tragedy. But for Sam Williams, the man Elizabeth fired a decade ago and hasn’t spoken to since, it’s a whole new world of pain.

But Elizabeth’s murder is just the start. As Sam reluctantly digs his way back into the past, more truths will crumble into lies.

More certainties will shade to doubt.

And more innocent people will die.

Out now, you can get your copy by clicking HERE!

I have had all of Joel’s books and novellas on my kindle for quite a while so I was glad of the nudge of a blog tour to finally read one! I really struggle to pick from my enormous TBR mountain and it’s great to discover such a fantastic book in there. I am not entirely sure why I haven’t picked one up before; I think I was worried that it wasn’t my type of read. Happy to report I was totally wrong!!

No One Will Hear is Sam Williams #2 and begins within days of where Dead North ended. We have a still bruised and battered Sam returning home to London from Manchester, processing the events that have occurred. This could easily be read as a standalone as the author provides enough information from previous stories but I’d highly recommend you read everything else Joel Hames has written.

There is a darkness to these books (tongue removal anyone?) but humour as well and a nod to a lot of classics. I was torn between being shaken by a murder scene to then chuckling at Sam’s acerbic humour. Sam is one of those character’s you can’t help but love. In No One Will Hear he is bequeathed with writing the memoirs of an old colleague and friend, Elizabeth Maurier, he overcomes the dislike of an arch enemy to get the job done all the while getting drawn into the investigation of her murder. Not only does Sam have memoirs to write and a murder to solve he must deal with Elizabeth’s fragile daughter and his partner Claire who is obviously distracted with her own demons.

A cracking read and I can’t wait to read more!

Catch up with the tour: