I’m back with the next batch of super speedy reviews, and I’m still catching up so I think these four books were read back in June. It feels like AAAAAGES ago!

Theodosia was six when her country was invaded and her mother, the Queen of Flame and Fury, was murdered before her eyes. Ten years later, Theo has learned to survive under the relentless abuse of the Kaiser and his court as the ridiculed Ash Princess.

When the Kaiser forces her to execute her last hope of rescue, Theo can’t ignore her feelings and memories any longer. She vows revenge, throwing herself into a plot to seduce and murder the Kaiser’s warrior son with the help of a group of magically gifted and volatile rebels. But Theo doesn’t expect to develop feelings for the Prinz.

Forced to make impossible choices and unable to trust even those who are on her side, Theo will have to decide how far she’s willing to go to save her people and how much of herself she’s willing to sacrifice to become Queen.

I really enjoyed Ash Princess. I borrowed it from the library as I had seen it pop up on BorrowBox a couple of times so figured I’d give it a go and I’m glad I did. It’s got strong characters, an interesting and twisty plot and I found it really engaging. It’s a YA fantasy book, and it kind of reminds me of Leigh Bardugo and Sarah J. Maas’s books, so of course I was hooked early on. Definitely recommended if you enjoy these authors!

‘I’m still playing games. This is just the deadliest yet.‘

Darrow is a rebel forged by tragedy. For years he and his fellow Reds worked the mines, toiling to make the surface of Mars inhabitable. They were, they believed, mankind’s last hope. Until Darrow discovered that it was all a lie, and that the Red were nothing more than unwitting slaves to an elitist ruling class, the Golds, who had been living on Mars in luxury for generations.

In RED RISING, Darrow infiltrated Gold society, to fight in secret for a better future for his people. Now fully embedded amongst the Gold ruling class, Darrow continues his dangerous work to bring them down from within. It’s a journey that will take him further than he’s ever been before – but is Darrow truly willing to pay the price that rebellion demands?

I’ll be the first to admit I didn’t love Red Rising. It was only ok for me, but boy oh boy did Golden Son redeem that! I was sucked back into Darrow’s world, and I was absolutely blindsided with how things went in this one. There is so much going on, lots to take in, but I was absorbed in this one compared to Red Rising. I loved Golden Son, and I am dying to read Morning Star to find out what happens next. Highly recommended if you’ve not read it already! 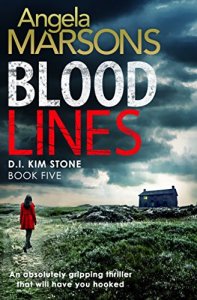 How do you catch a killer who leaves no trace?

A victim killed with a single, precise stab to the heart appears at first glance to be a robbery gone wrong. A caring, upstanding social worker lost to a senseless act of violence. But for Detective Kim Stone, something doesn’t add up.

When a local drug addict is found murdered with an identical wound, Kim knows instinctively that she is dealing with the same killer. But with nothing to link the two victims except the cold, calculated nature of their death, this could be her most difficult case yet.

Desperate to catch the twisted individual, Kim’s focus on the case is threatened when she receives a chilling letter from Dr Alex Thorne, the sociopath who Kim put behind bars. And this time, Alex is determined to hit where it hurts most, bringing Kim face-to-face with the woman responsible for the death of Kim’s little brother – her own mother.

As the body count increases, Kim and her team unravel a web of dark secrets, bringing them closer to the killer. But one of their own could be in mortal danger. Only this time, Kim might not be strong enough to save them…

Angela kindly sent me a copy of Blood Lines as I was playing catch up with the DI Kim Stone books so I was eager to read it! Not only does it bring back one of my fave baddies, Dr. Alex Thorne, but it’s chock full of tense moments! So much so that I actually had to put this book down for a couple of weeks before I could finish it. It was absolutely brilliant though, and I’m looking forward to reading the next books in the series!

Percy Jackson and The Titan’s Curse by Rick Riordan

Half Boy. Half God. ALL Hero.
It’s not every day you find yourself in combat with a half-lion, half-human.
But when you’re the son of a Greek God, it happens. And now my friend Annabeth is missing, a Goddess is in chains and only five half-blood heroes can join the quest to defeat the doomsday monster.
Oh and guess what. The Oracle has predicted that not all of us will survive . . .

Another rip-roaring read here. This series is just so much fun that it’s impossible not to enjoy them while reading. I love Percy and this book was no exception. Witty, fast-paced and with plenty of monsters to fight, the Titan’s Curse was another brilliant read. Super fun for children and adults alike!

Percy Jackson and The Titan’s Curse by Rick Riordan

So that’s it for now. I’ll have another one of these posts up soon as I’m still working my way through the backlog of books to be reviewed! The joys of taking a break 😂

Until next time, happy reading 📚