Ellen is taking part in the blog tour for The Lion Tamer Who Lost by Louise Beech and I’ll be sharing her review with you all in just a little bit!

Louise Beech is an exceptional literary talent, whose debut novel How To Be
Brave was a Guardian Readers’ Choice for 2015. The sequel, The Mountain in
My Shoe was shortlisted for Not the Booker Prize. Her third book, Maria in
the Moon, was widely reviewed and critically acclaimed. Her short fiction has
won the Glass Woman Prize, the Eric Hoffer Award for Prose, and the
Aesthetica Creative Works competition, as well as shortlisting for the Bridport
Prize twice. Louise lives with her husband and children on the outskirts of
Hull, and loves her job as a Front of House Usher at Hull Truck Theatre,
where her first play was performed in 2012

Be careful what you wish for…
Long ago, Andrew made a childhood wish, and kept it in a silver box. When it finally comes true, he
wishes it hadn’t…
Long ago, Ben made a promise and he had a dream: to travel to Africa to volunteer at a lion reserve.
When he finally makes it, it isn’t for the reasons he imagined…
Ben and Andrew keep meeting in unexpected places, and the intense relationship that develops seems
to be guided by fate. Or is it?
What if the very thing that draws them together is tainted by past secrets that threaten everything?

The Lion Tamer Who Lost by Louise Beech

Louise Beech has once more broken me with her beautiful writing, her intention must be to crush my usually stony reading heart to dust! The Lion Tamer Who Lost is primarily a love story about Ben and Andrew but their journey was never going to be an easy one. Ben is 23 years old and living at home with his brash and bigoted father. Ben is struggling with his sexuality and fears of rejection by his family. Andrew is an older man that enters Ben’s life and turns it upside down. Can they make their relationship work? I really enjoyed the coincidences that occurred in TLTWL, this is a subject that fascinates me in real life so I never struggled to believe it’s place in the book.

The story is told over different timelines; Ben/Andrew in the past and the present where we find Ben working in a Lion sanctuary obviously trying to get over something. This “something” is gradually revealed throughout the novel and there is not much more I can say without spoiling the reading experience for others.

I loved the Lion Sanctuary setting of The Lion Tamer Who Lost; Louise’s descriptions are so vivid that I was immediately transported to Africa. The relationship between Ben and his lion cub Lucy was a delight and really gave an insight into Ben’s determination and strength of character. He refused to give up on Lucy and was obviously so attached to her and her success in becoming part of the pack. I think Lucy was actually my third favourite character after Ben and Andrew!

Louise’s writing is so powerful that in my mind Ben and Andrew are real people. For days after I’d be thinking about them before catching myself and remembering it wasn’t a film I’d watched or anyone in my life that actually existed. To be able to create that depth of emotion and recognition in a character from a reader takes some doing.

A gorgeous book which deserves all the stars!

Check out the blog tour: 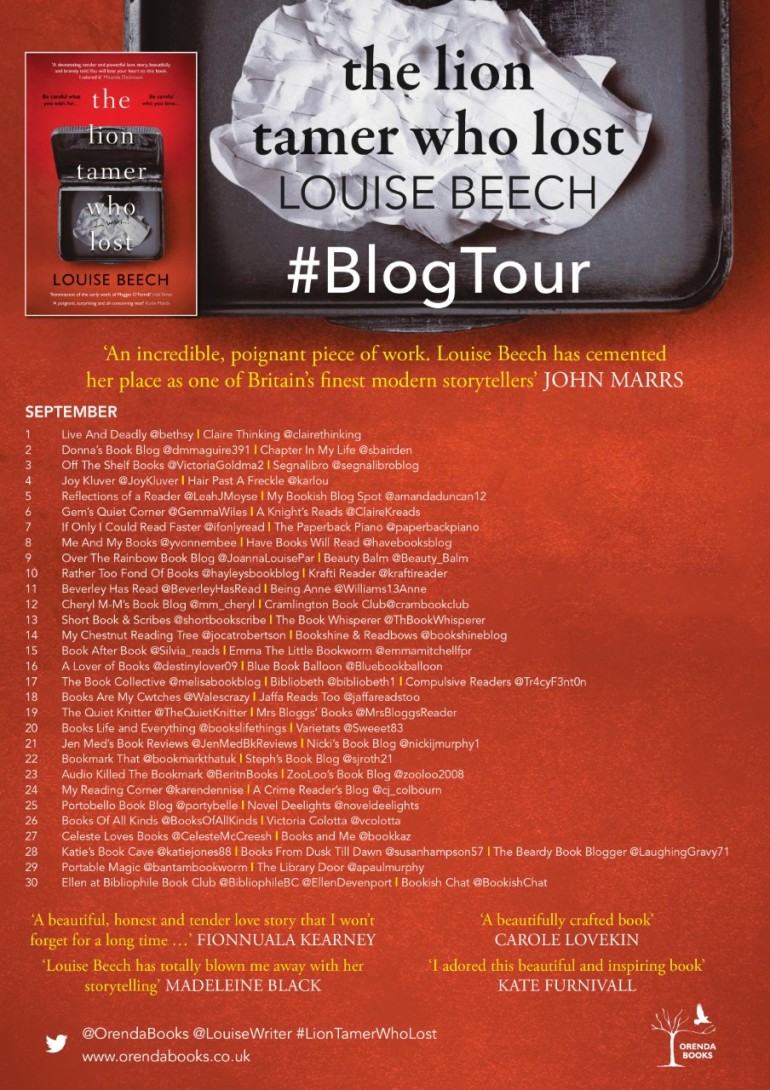