Today, Ellen is taking part in the blog tour for Hush Hush by Mel Sherratt and I’ll be sharing her review with you all a little further down! 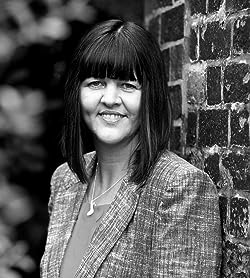 Mel Sherratt is the author of ten novels, all of which have become bestsellers. In 2017, she was named as one of her home town of Stoke-on-Trent’s top 100 influential people.

She lives in Stoke-on-Trent, Staffordshire, with her husband and terrier, Dexter.

A killer is on the loose, attacking people in places they feel most safe: their workplaces, their homes. It’s up to DS Grace Allendale to stop the murders, and prove herself to her new team.

All clues lead to local crime family the Steeles, but that’s where things get complicated. Because the Steeles aren’t just any family, they’re Grace’s family. Two brothers and two sisters, connected by the violent father only Grace and her mother escaped.

To catch the killer, Grace will have to choose between her team and her blood. But who do you trust, when both sides are out to get you?

I have a confession to make….this is the first thriller type book that I have read by Mel Sherratt! Previously I have been a massive fan of her sparkly alter ego Marcie Steele’s books so I was a little nervous of reading a switch in genre from the same author. Well, there was no need for nerves as Hush Hush blew my little sparkly socks off. I’m not averse to crime/thrillers/grit lit so loved all the elements of this novel which mixed together perfectly.

DS Grace Allendale returns to her home town and is immediately recruited on to a gruesome murder case, the only fly in the ointment is that her estranged family are involved. Is blood thicker than water? Where do Grace’s loyalties lie; with her new team or the family who suffered under the brutality of the same father (George Steele)? As much as Grace has grown up apart from her half-brothers and sister you do wonder if her head will be turned and having an insider on the force certainly appeals to the Steele brothers who have taken over the criminal side of their father’s legacy.

The murders are particularly vicious and the thought that they are committed in places where the victims would consider themselves safe gave me the shivers. I was definitely checking over my shoulder when I was out and about in public! I do love a gruesome death scene and Hush Hush definitely delivered.

There are some characters in Hush Hush from the previous Allie Shenton trilogy  but enough detail was given about them that I could keep up and in fact it made me want to bump up these books on my TBR. Mel Sherratt writes excellent female protagonists and I want to get to know them all! The men aren’t always the driving force and we see this in all the strong women in Hush Hush; Grace, her mother, Allie and her estranged sister. None of them are willing to bow down to the men in their lives and in some cases they have been irrevocably damaged mentally and/or physically.

I loved Hush Hush and can’t wait for Tick Tock the next book in the series which is due April 2019!

Got these divine wax melts from @cauldron.candles and I can’t wait to get them burning, they smell amazing 🖤
Eight years ago today, I married the best man I know 🖤 @moloneykevin
I was going to post this tomorrow in the hope that I’d have finished another of the (3) books I have on the go at the moment. And then I realized that there was no point in waiting because there is not a hope of me finishing a book today 😂
#bookpost
To Kate,
Picked up #Fire and #Bitterblue by @kristincashore from @ballybanelibrary today 📚
coffeeinonehandbookintheother.wordpress.com/
A Cat, A Book, and A Cup of Tea
Varietats