Today is Ellen’s stop on the blog tour for The Boy Who Stole Time by Mark Bowsher and I’ll be sharing her review with you all a little further down! 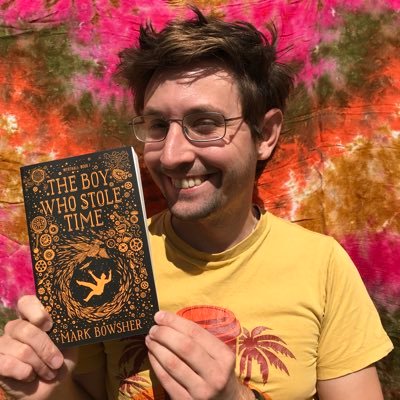 Mark is a proudly dyspraxic writer and filmmaker who has made over 100 book promos for a certain publisher named Unbound. He wrote and directed his first full-length play, Not the Story of Me, at 20 and went on to make three shorts which won Best Short awards (plus one Best Screenplay award) at festivals in the UK and the US. The last of these, Only One Person Will Like This Film, was picked by the BFI as one of their ’10 to try’ out of over 300 films at LSFF 2013. He has written short fiction (The Pitch and I Killed Tristan Metcalf and Here’s How I Did It… ) for Lionsgate’s Fright Club ezine as well as articles for Den of Geek and Cult TV Times. Since going freelance in 2013 he has created video content for Santander, Pearson, Choice Support, The Big Issue and MyLex as well as music videos (all based on concepts he pitched to the artists) for Nisha Chand, Ekkoes, Good Work Watson, Morgan Crowley and Go-Zilla. He recently wrote and directed the pilot episode for a sitcom based on his previous career in film marketing entitled It’s All Lies. He isn’t married and doesn’t live in Surrey but he did once climb a mountain dressed as Peter Pan.

When 12-year-old Krish finds out his mum is dying, he is desperate to give her more time to live. This leads to a deal with a devil-like creature to travel to another realm, Ilir, and collect the Myrthali – the essence of time itself.
Ilir is a tiny desert world where the days are a handful of hours long and there is magic and treachery on every corner. Here Krish is set three impossible challenges by the brutal King Obsendei to win from him the Myrthali. He joins forces with the razor-tongued, young girl-wizard Balthrir, who hopes to free her parents from the Black Palace; a living, breathing structure built entirely out of those subjects who have incurred the wrath of the King.

But as Krish battles these impossible tasks he may be about to learn that there is more than his mother’s life at stake as he gets embroiled in a blood-thirsty fight for power in Ilir that will push his friendship with Balthrir to its limits.

The Boy Who Stole Time by Mark Bowsher

The Boy Who Stole Time may be aimed at younger readers but I really enjoyed it. Fantastic characters, world building and depth of story were spot on also the cover is so beautiful! It’s definitely an eye catcher which I find an important aspect when my daughters are choosing their next read in the book shop.

The main character in the book is Krish, a 12 year old boy who is confronted with every child’s worst nightmare of their parent being ill and the fear that they may not recover. Krish has always been told how precious time is and becomes more aware with his mum’s sickness; what if he could buy (or steal) her a little more? His desires to have more time appear to summon a devil type creature who tells Krish an ancient tale of a magic powder called Myrthali which is the essence of time itself. The devil persuades Krish to enter into a deal – he will travel to another realm, Ilir, and retrieve the powder from the clutches of the brutal King Obsendei. Of course this was never going to be an easy task and Krish is sent on a magical, terrifying adventure from then on and must complete three seemingly impossible tasks before the King will hand over his treasured Myrthali.

The Black Palace of King Obsendei really grabbed my imagination; a living, breathing structure built entirely out of those subjects who have incurred the wrath of the King. These poor people are forced to clamber and stand on each other to construct the walls and floors of this awful “building”.

Along the way Krish teams up with the awesome Balthrir – a young girl-wizard with a cutting sense of humour and heart of gold. I think that Balthrir was one of my favourite characters. She is seemingly pretty hardcore but carries secrets and heartache of her own. Krish and Balthrir’s worlds collide and they must learn to work together to complete the tasks and survive the cut throat, power-hungry island of Ilir.

This story reminded me of the stories of Arabian Nights/One Thousand and One Nights that I loved to read as a child. There are elements of The Boy Who Stole Time that will appeal to everyone. This book is the first in the series and I can’t wait to see what is going to happen next!!

Today #IrelandReads and I am here for it! 🙌🏻📚
Finally got my copy of Unlucky 13 by James Patterson today after the first one got lost in the post 🤦🏻‍♀️📚
An @orbitbooks_uk appreciation post 🖤
Picked some new reads for this week 📚
#currentlyreading
To Kate,
coffeeinonehandbookintheother.wordpress.com/
A Cat, A Book, and A Cup of Tea
Varietats