Today I’m delighted to be taking part in the blog tour for Halcyon by Rio Youers and I’ll be sharing an extract with you all in just a little bit! 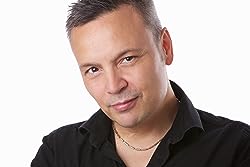 Rio Youers is the British Fantasy Award–nominated author of Old Man Scratch and Point Hollow. His short fiction has been published in many notable anthologies, and his novel, Westlake Soul, was nominated for Canada’s prestigious Sunburst Award. He has been favorably reviewed in such venues as Publishers Weekly, Booklist, and The National Post. His latest novel, The Forgotten Girl, was released by Macmillan/St. Martin’s Press in June 2017.
Rio lives in southwestern Ontario with his wife, Emily, and their children, Lily and Charlie.

Halcyon is the answer for anyone who wants to escape, but paradise isn’t what it seems.

A self-sustaining community on a breathtakingly beautiful island, Halcyon is run for people who want to live without fear, crime or greed. Its leader has dedicated her life to the pursuit of Glam Moon, a place of eternal beauty and healing, and believes the pathway there can only be found at the end of pleasure.

On the heels of tragedy, Martin Lovegrove moves his family to Halcyon. A couple of months, he tells himself, to retreat from the chaos and grind. Yet he soon begins to suspect there is something beneath Halcyon’s perfect veneer. As the founder captivates his young family, Martin sets out to discover the truth of the island, however terrible it might be, where something so perfect hides unimaginable darkness beneath…

Laura muttered, “He does Dylan better than Dylan,” and Martin snapped out of his show. That was when he noticed the clicking. It wasn’t the rhythmic clicking he associated with Shirley’s texting. This was constant. A purr. He looked up, expecting to see her zoned out. And she was, but not in the usual way. Her head was angled awkwardly and her eyelids uttered. Her thumbs blurred on the screen.

She was having some kind of seizure. Martin drew his leg off the arm and sprang from his chair. He got Laura’s attention by waving a hand in front of her eyes, then crossed the room to where Shirley reclined in the other armchair.

He cradled the back of her head in one hand and gently tilted her jaw to keep her airway open. She garbled something. The veins across her throat bulged.

“What’s happening to her?” Laura asked, crouching beside the armchair. She tried removing the cell phone from Shirley’s hands but Shirley held tight, her thumbs still working.

“Seizure, I think,” Martin said. “Maybe she was looking at flashing images.”

“Should I call nine-one-one?”

Martin looked from Shirley to Laura, then down at the cell phone’s screen as Laura tried to free it from their daughter’s clasp. He glimpsed what she’d typed: a string of random letters, symbols, and emojis, but with several full words interspersed in all the nonsense. Martin barely logged them before Laura pried the phone away. He definitely saw SCARED and CHIPPEWA and perhaps BOTTLECAP, or maybe it was BOTTLETOP.

“Martin?” Laura snapped. She threw the cell phone on the floor and clutched Shirley’s hands. “Nine-one-one?”

“Wait,” he said. He eased Shirley onto her side and peeled damp strands of hair from her brow. “It’s okay, baby. Mom and Dad are here.” Her eyes flashed open and closed. Her mouth moved silently. Martin pressed the cool back of his hand to her cheek and she whimpered. A moment later, she screwed her face up and started to cry. It was like a pressure release. The tightness left her body at once. Her trembling first lessened, then stopped altogether.

Martin wiped her tears away. She blinked, took deep breaths, and looked into her empty hands for her phone. Her expression switched from confusion to fear.

“What about Edith?” Martin asked.

Shirley shook her head and groaned. More tears spilled from her eyes. “She’s screaming inside,” she said.