Today Ellen is one of the stops on the blog tour for Die Cold, the latest Jake Boulder novel, by Graham Smith and I’ll be sharing her review with you all a little further down!

Graham Smith is a time-served joiner who has built bridges, houses, dug drains and slated roofs to make ends meet. Since Christmas 2000, he has been manager of a busy hotel and wedding venue near Gretna Green, Scotland.

Graham is the founder of Crime and Publishment, a weekend of crime-writing classes which includes the chance for attendees to pitch their novels to agents and publishers. Since the first weekend in 2013, ten attendees have gone on to sign publishing contracts. 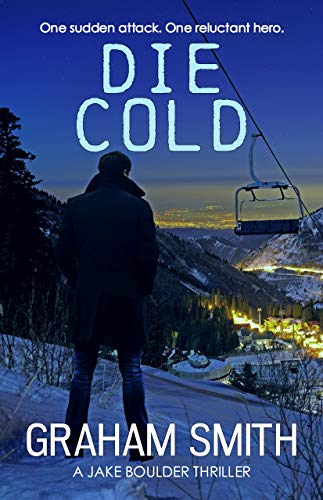 Jake Boulder is working as a bartender, at an exclusive Vermont ski resort on New  Year’s Eve, when armed terrorists hold up the lodge and take the guests hostage.

Trapped with the other hostages, Boulder watches in horror as the female terrorist leader disfigures a singer to make her point. He wants to fight back, but is unarmed and being held at gunpoint.

When Boulder finds a way to escape from the terrorists he searches for a way to raise the alarm. After he discovers the terrorists plan to leave no witnesses to their crime, he knows he has a race against time to save as many innocent people as he can…

But will Boulder be the reluctant hero and save the day?

Die Cold is a high octane thriller from first shot fired to the final punch thrown! Book four in the Jake Boulder series – a series that just keeps getting better and better.

After being concerned about how Jake would recover from the events of Past Echoes (book 3) it was fantastic to see him back on form and then some!

Jake is working as a barman for an exclusive ski resort favoured by the uber rich when a group of terrorists descend and take everyone hostage. This gang are obviously professionals and it is clear to Jake that no one is going to get out of this situation to tell the tale unless he takes action.

An absolutely gripping read that I could not put down, this book would make an amazing film although I’m not quite sure who would star as Jake, I’ll leave that to your own sordid imagination….

If I had to say there was anything missing from this book it would be a white vest for Mr Boulder.